At a Tuesday press conference Gov. Phil Scott announced his decision to sign a new executive order to keep federal funds flowing that were tied to his 15-month state of emergency. 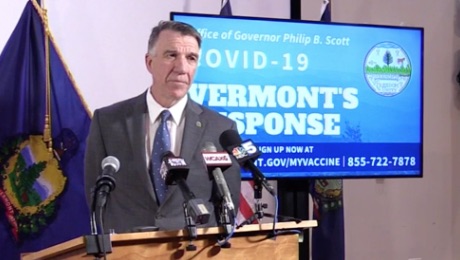 The governor said he wants to ensure that people who relied on federal funding during the pandemic continue to get help.

“As I said weeks ago, we want to make sure that when lifting this order, people who’ve relied on some of the programs and services aren’t left behind.”

Comments Scott made at one of his recent media briefings, combined with an open letter written by Hunger Free Vermont, revealed that massive amounts of federal dollars were tied to the ongoing state of emergency status the governor used to justify his COVID-19-related shutdown orders.

“[My new executive order] extends Vermont’s access to federal funding for expanded emergency housing and feeding programs,” he said, noting that this authority comes from his “general powers” instead of emergency powers.

According to the Hunger Free Vermont open letter, “loss of funds tied to the declaration of emergency that are helping households afford basic needs in this unprecedented time would be detrimental to Vermont’s economy and health.”

It continues: “Maintaining access to critical FEMA-funded programs supporting Vermonters’ access to basic needs like food, emergency housing, and more depends upon the continuation of a declared State of Emergency in some form. That support is essential.”

An additional 130 Vermont businesses and organizations co-signed the letter, urging Scott to keep federal dollars flowing into the state.

At his May 28 press conference, the governor admitted that federal financial incentives, including FEMA funds, played a role in the continuous renewal of the emergency status.

“[Also] we may have to put some provisions in place in order to, for example, continue to test and get paid for it, and administer vaccines and so forth, and get paid for it. So those are the types of things that we are trying to work through in terms of the state of emergency.”

As part of that federal funding, the Department for Children and Families Economic Services Division put out at least $45 million in food benefits via its 3SquaresVT program.

“These funds not only support the food budgets of nearly 70,000 Vermonters, but they stimulate our economy and support our local food retailers and farmers by keeping millions of federal dollars each month in our communities, especially during the summer and fall months when local food is abundant in stores and at farmers markets throughout the state,” the Hunger Free Vermont letter reads.

Funding for Vermont Everyone Eats is also tied to the emergency declaration, and Vermont’s service industry has benefitted from that funding.

“Restaurant owners across the state have shared that this program is the primary reason why they have remained in business and not had to lay off their staff members,” the letter states.

About 12 percent of Vermonters say that food costs for their children are a challenge, 23 percent say “usual household expenses” are challenging, and 12 percent say they have trouble making rent.

Scott enjoys popular political support for his handling of the coronavirus, which has been associated with the deaths of 256 Vermonters since the beginning of 2020. Just 20 of those deaths occurred in patients under the age of 60.