A perfect score, according to Vermont Right to Life Director Mary Beerworth, essentially means he endorses every major policy initiative of Planned Parenthood — including abortion.

“That is what it means. … Once upon a time Phil was in favor of parental notification and some other issues, but I guess he has backed all the way down,” Beerworth told True North Reports. 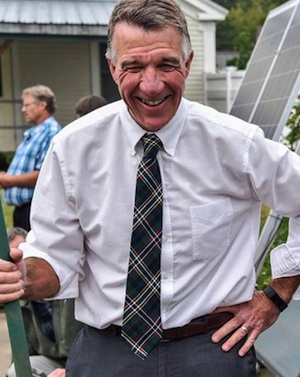 MIXED MESSAGES: In 2016 Gov. Phil Scott indicated he was “pro-choice” but with conditions regarding public funds, parental notification and late-term abortions. But after receiving a new perfect score from Planned Parenthood’s latest survey, things are not so clear.

The survey included 18 questions, and about half come with further explanation, leaving little room for misunderstandings.

One question on the survey was, “Do you support legislation that would guarantee full, unrestricted abortion rights into state law?”

If so, that does not appear to match his position on the issue in past years:

“Because of my beliefs, I find it impossible to answer the questions in [the Planned Parenthood] survey with a simple ‘yes’ or ‘no.'”

“I do support a woman’s right to choose; however, I do not believe it needs to be a ‘blank check’ in order to be effective,” he said. “I do not support partial-birth abortion, because I believe there are many options available to terminate a pregnancy well before that stage of development.”

Another question from this year’s survey reads, “Will you support laws that stop discrimination in health care based on sex, sexual orientation, and gender identity, meaning health insurance companies and others could not refuse to allow a person to participate in a program or access health care because of their gender identity?”

The explanation reasserts that public funds must support “transition-related surgery.” Beerworth said the notion of publicly funded transgender surgeries is an area where parental consent should come into play.

“I am very aware that not all Vermonters share my pro-choice views; therefore, I do not believe that abortions should be funded with taxpayer dollars,” Scott said in 2016. “Just as important as protecting a woman’s right to choose, is respecting others’ right to oppose abortion for religious or personal reasons.

“Using public funds to support something that many people strongly disagree with is not an appropriate public policy. But I would not support cuts directed specifically and only at family planning services.”

But in this survey, Scott answered yes to two questions that might suggest otherwise.

Beerworth said that currently here in Vermont taxpayer money is used for abortions.

“By court order, we already pay for a third of the abortions in the state for income-eligible women under the Doctor Dynasaur program,” she said.

She noted an ironic part of the program is that pregnant women, for purposes of receiving public money including for abortions, are counted as “a family of two.”

Beerworth said based on this new survey, it’s not clear if Scott still supports parental notification.

The Phil Scott For Vermont 2018 campaign not return True North’s requests for comment.

Beerworth said Scott did not return Vermont Right to Life’s candidate survey, which asks if you support the current status quo on abortion in Vermont.

Beerworth noted how parental notification can be crucial to put an end to sexual abuse.

“The number one question that a father asks when his daughter comes up pregnant is ‘who’s the father of the baby?'” she said. “Right now, with no parental notification, the father is just slip-sliding away under the radar screen and [an abuser] may be continuing to assault other women or be in inappropriate relationships.”

“Two very different choices for Vermont’s next governor,” an ad stated. “Phil Scott supported restrictions on a woman’s right to choose. And Vermont Right to Life, which opposes all abortion — even for rape and incest — recommended Phil Scott.”

Planned Parenthood has also been aggressive with its political advocacy budget in recent years, even while they spend less on other services such as PAP tests and breast exams.

Vermont currently has no laws restricting access to abortions. Although rare, across the nation abortions happen up until the final month of pregnancy. The Centers For Disease Control and Prevention reports that 1.3 percent of abortions happen after 21 weeks.

“This thing about UVM engaging in late-term abortions … I have never seen people so angry about something,” she said. “They are just mad.”

11 thoughts on “Gov. Scott gets ‘100 percent’ score from Planned Parenthood”