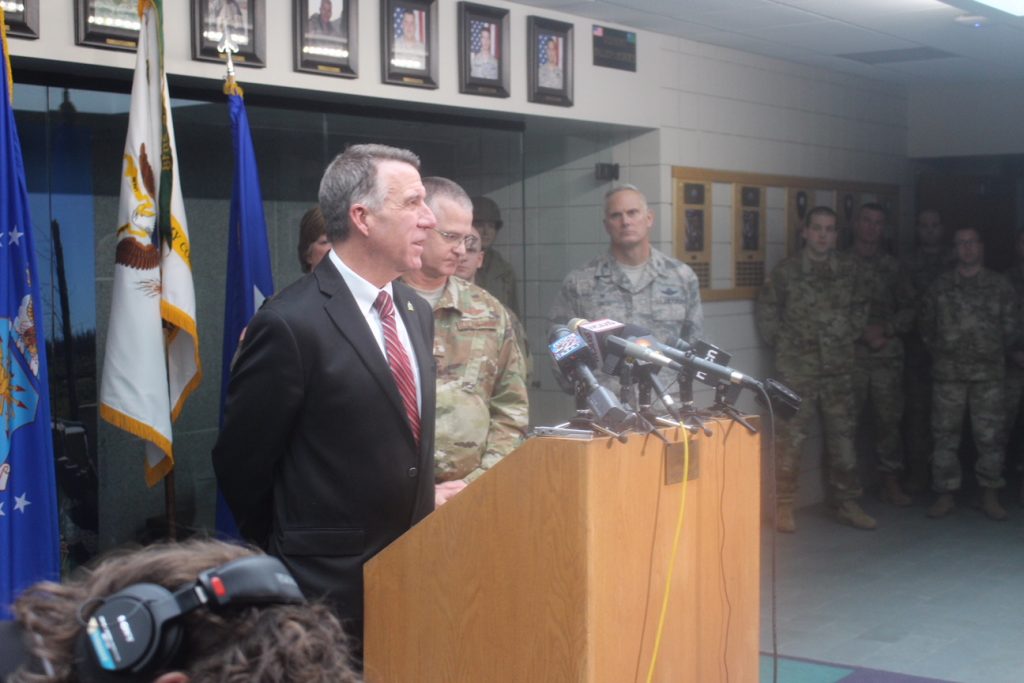 RESPONDING TO CRITICS: Gov. Phil Scott and Maj. Gen. Steven Cray were on hand at Camp Johnson to field questions from the press regarding allegations of a toxic party culture and discrimination on the base.

COLCHESTER, Vt. — Gov. Phil Scott on Thursday stood strongly behind the Vermont National Guard in response to media reports that the organization is awash in a culture of partying and sexual misconduct.

During the news conference, both the governor and Vermont’s top general admitted a need for improvement in organizational processes such as sexual assault response and prevention programs, as well as equal opportunity initiatives. However, they strongly denied that the incidents reported in VTDigger’s “The Flying Fraternity” series were widespread or represent the Guard’s culture as a whole.

“As we’ve seen throughout time, in many areas and in many organizations there will be instances of poor judgment, mistakes made and an occasional bad apple,” Scott said. “But individual situations such as these are the exception, not the rule. They do not represent the Vermont National Guard as a whole or reflect the vast majority of members and leadership who serve with honor.”

He continued that it is important for leadership to ensure that “all legal and ethical standards” are upheld by Guard members. The governor also said that based on conversations he’s had with the Guard’s leadership and his own legal advisers, individual cases of sexual misconduct have been thoroughly addressed.

While various members of the media questioned if Scott should appoint a special investigative body to further look into matters, the governor reiterated that he trusts the current system and that no such action would be taken.

Cray, who is planning to retire next March, told media that while facts reported on individual misconduct cases were largely accurate, the vast majority of Guard members and leaders uphold organizational policy and follow expected norms of behavior. The Vermont National Guard is comprised of 2,500 men and women in the Vermont Army National Guard and 1,000 in the Vermont Air National Guard.

“To be clear,” Cray said, “I vehemently disagree with and dispute the negative characterization of our members and our culture in recent media coverage. I believe that through adversity we will continue to grow and improve our organization.”

Cray said privacy limitations prevent him from commenting on specific cases, but he reassured that in each case military protocol was followed.

“The individuals were all granted an appeal process and were reviewed at multiples levels in and outside of the Vermont National Guard,” he said.

According to Cray, there have been 33 reports of sexual assault received since 2013, and 13 of those cases involved a Guard service member. Nineteen of the reports involved conduct that was alleged to have occurred prior to 2013.

Cray said the numbers show that members feel safe coming forward to report misconduct, and he criticized reporters for attempting to contact alleged victims without going through the Guard’s press offices.

He also denied reports that a popular recreation area on the base allowed misconduct to flourish.

“What I am vehemently opposed to was the description of the culture,” Cray said. “That described a culture in which there was exclusivity, consuming alcohol during the wee-hours and whatnot, and it was closed to the personnel of the base — which was not accurate.”

Cray said the room in question was closed about a year ago for remodeling.

Prior to Thursday’s news conference, VTDigger reported that it was temporarily removed from the Guard’s official press list. Cray said he took that action because he believed reporters were acting unprofessionally in their characterizations of the Guard. VTDigger founder and editor Anne Galloway was among the reporters asking questions at the news conference Thursday.

Cray said that while VTDigger’s press credentials have been reinstated, he continues to disagree with the way the Guard was portrayed by the news outlet.

One thought on “Gov. Scott and National Guard respond to allegations of toxic culture”