Republicans are making a multi-million dollar push for the Jewish vote as Democratic lawmakers struggle with accusation of anti-Semitism, Politico reported Sunday. 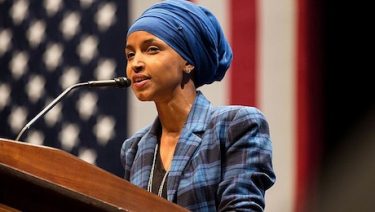 Minnesota Democratic Rep. Ilhan Omar has made comments that many see as anti-Semitic.

Such spending will far surpass what the group spent during past campaigns, sources told reporters.

“This strain within the Democratic Party is making those centrist and center-left Jews who care about these issues feel more and more uncomfortable, and with the strength of Donald Trump and the Republican Party on these issues we believe that we’ll be able to bring those folks over to the Republican side,” Matt Brooks, who has served as RJC executive director for 30 years, told Politico.

Brooks was referring to one Muslim progressive Democratic lawmaker who has made what many people believe are anti-Semitic remarks.

The House passed a resolution in March that initially condemned statements Minnesota Democratic Rep. Ilhan Omar made, but it was subsequently“watered down” to condemn hatred in all forms. The resolution was in response to a claim she made suggesting that Republicans’ support for Israel is bought by the American Israel Public Affairs Committee (AIPAC). Others interpreted her comments as Jews having a “dual loyalty” to the U.S. and Israel.

Republicans are doubling down on the strategy, according to Politico’s Sunday report. Trump, Vice President Mike Pence and three White House officials, including adviser Jared Kushner, made trips to the Venetian Saturday in Las Vegas, where RJC members were gathered for the third day of their annual spring conference.

The president riled up the crowd and accused Democrats of opposing Israel and “advancing by far the most extreme, anti-Semitic agenda in history.” Democrats are skeptical that the GOP will succeed. Their party has all but dominated the Jewish vote since 1992, with Democrats winning between 69 percent and 79 percent in each presidential election.

“This is not new. We’ve seen different iterations of this in previous elections either in midterm or presidential elections, and each time it’s kind of repackaged with a different narrative in an attempt by Republicans to chip away at the Jewish vote — and every time it fails,” Halie Soifer, the executive director of the Jewish Democratic Council of America, told Politico.

Kushner, who is Jewish, has worked to cultivate ties with the likes of Haim Saban, a pro-Israel mega-donor who gave more than $6 million to a super political action committee backing former Secretary of State Hillary Clinton’s presidential run. Saban is heavily critical toward the Democrats’ inability to wrangle in Omar.

“I sincerely hope the [presidential] nominee continues the traditional Democratic Party [policy] as it relates to the U.S.-Israel alliance,” he told Politico.