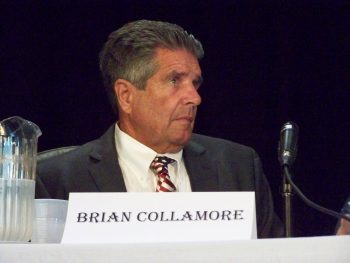 Both bills are in the Senate Education committee. Gov. Phil Scott said today he opposes a statewide ban. “I believe this is a local decision,” he said at today’s press conference. He approves the state’s practice of offering funding to school districts, but not requiring resource officers.

S.76 was announced yesterday at a Rutland press conference held by Mayor David Allaire and Rutland senators and co-sponsors Josh Terenzini and Brian Collamore. Judging by attendance at the press conference, S.76 appears to enjoy strong support from local law enforcement. “Thank you to the Rutland City, Rutland Town, Castleton, Fair Haven, Middlebury, Killington police departments, the Rutland County Sheriff’s office, Fair Haven and Mill River schools, and all others who were there,” Terenzini said on his Facebook page.

“The rural nature of Vermont’s communities could result in relatively slow response times for law enforcement when responding to life threatening incidents in schools,” S.76 states. “During a life-threatening incident in a school, the safety of children and staff is imperative and schools without a school resource officer (SRO) on-site are at a severe disadvantage in responding in a timely manner.” It cites two examples of SRO intervention preventing potentially catastrophic school shootings:

The bill also notes that “ a first layer of defense in a school is added when an SRO is onsite during a serious incident. According to a report entitled ‘Ten Essential Actions to Improve School Safety’ issued by the COPS Office’s School Safety Working Group to the U.S. Attorney General in 2020 (report), school resource officers “may have a profound impact on the school’s ability to prevent targeted violence and other maladaptive behaviors.”

In contrast to S.76, S.63 would expel SROS assigned to schools from Vermont public schools. Their presence leads to unacceptably high arrests – particularly of minorities – and feeds the “school-to-prison pipeline,” say its authors.

The presence of police in schools leads to too many arrests, and too many of the arrestees are minorities, says S.63, sponsored by Sens. Alison Clarkson (D-Windsor), Ruth Hardy (D-Addison), Chris Pearson (D/P Chittenden), and Anthony Pollina (P-Washington). The bill finds: