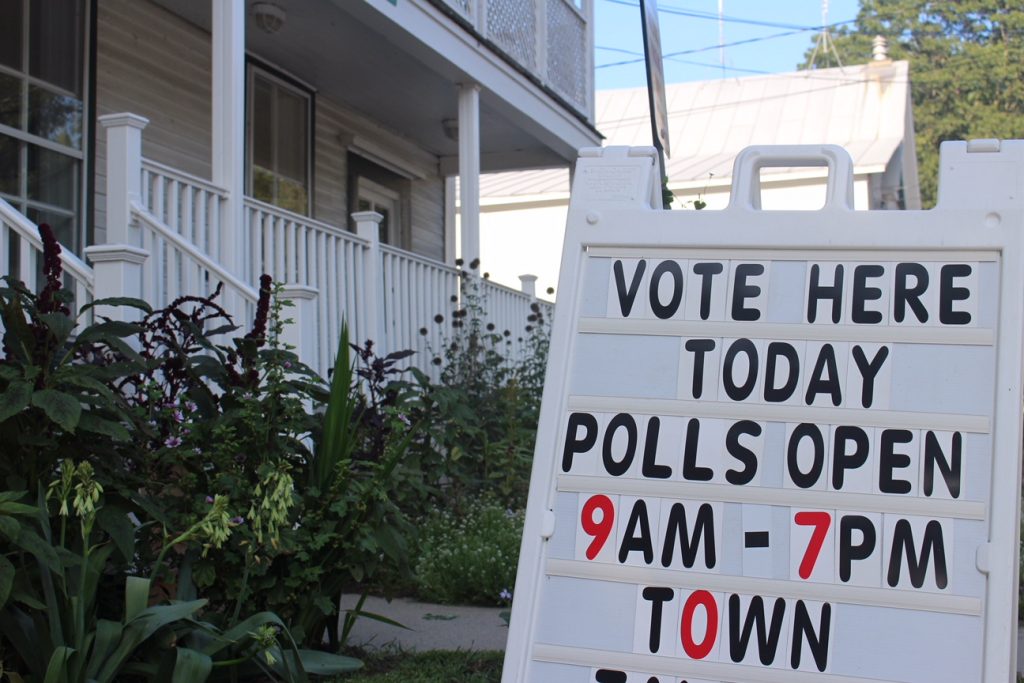 CIVIC DUTY: Vermonters took to the polls Tuesday to participate in their right to vote. In the gubernatorial primary election, about 68,235 Democratic ballot votes, and 36,780 Republican ballot votes, were cast.

GOP leaders aren’t taking lightly the nomination of the nation’s first major-party transgender gubernatorial candidate, and are calling on Vermonters to unite behind Gov. Phil Scott in what is shaping up to be a choice between identity and affordability.

Leaders of the Vermont Republican Party said Wednesday they are taking the development very seriously.

“I think it’s going to be a race that Phil Scott cannot take for granted by any stretch,” Senate Minority Leader Joe Benning, R-Caledonia, told True North. “You have the novelty of a ‘first in the nation,’ which somehow brings out the Democrats and Progressives in a serious way when it comes time for backing that kind of a thing.”

To win statewide races, candidates need to raise millions of dollars and develop name recognition. Benning said Hallquist is on track to get such resources.

“I think Hallquist will gain the money that she needs to run the race from various liberal groups that will be turning out in force to try to make a point with her candidacy,” he said. “If the Republican party in this state is going to survive, I sincerely believe that Republicans need to rally around Phil Scott and remember where we are in the scheme of things.”

Scott defeated conservative challenger Keith Stern by about a 2-to-1 margin. Stern looked to take advantage of a wave of disgruntled voters after the governor signed a law this year imposing gun magazine limits and universal background checks on law-abiding Vermonters.

But it was an opportunity missed, as critics point to Stern’s weak debate and interview performances as the reason he fell short.

Nevertheless, Scott’s approval rating dropped about 20 percent after he signed the gun bills in front of an irate crowd earlier this year. Many voters told True North that they would never support Scott again. However, if gun owners stay home in November, they risk allowing Hallquist, who is ranked “extremely anti-gun” by Gun Owners of Vermont, to take office.

For her part, Hallquist won by more than a 2-to-1 ratio against both military veteran James Ehlers and single-parent Brenda Siegel. Write-in candidate state Sen. John Rodgers, and 14-year-old high school student Ethan Sonneborn, each failed to make a competitive showing.

Rodgers also looked to capitalize on the wave of discontent over the gun laws, but likely due to his write-in status, he gathered only around 3,900 votes.

It didn’t take long for green-energy groups to start celebrating what they anticipate will be a further shift towards controversial wind and solar energy projects for Vermont. As former head of Vermont Electric Cooperative, Hallquist has a strong energy background, and she is committed to the state’s 90 percent renewable goal for 2050.

Congrats to @christineforvt on a resounding victory – she's a climate champ, signed the #NoFossilFuelMoney pledge, and is on track to be the nation's first trans governor! #vtpoli pic.twitter.com/nU6heHjKlz

Also, early indication is that her transgender identity is already galvanizing voters.

House Minority Leader Don Turner, R-Milton, who is stepping down this year to run for lieutenant governor, said it’s essential that the GOP maintains or gains seats in the liberal-dominated Statehouse.

“It’s absolutely imperative for the House to maintain the ability to sustain a veto,” he said. “That is critical for Vermont, whether I win or not.

“I want to ensure that we maintain as many House Republicans and Senate Republicans as possible, because the more balance there is in the legislature, the better chance the governor has of adopting and implementing his agenda, which I know is making it more affordable for Vermonters to live here.”

Turner didn’t face a primary opponent, but he still received 28,156 votes from voters on Tuesday.

“I’m pleased with the numbers, the percentages that we’re doing in our race,” he said. “I feel that is good considering six weeks ago no one knew who Don Turner was.”

Turner faces off in the general election against incumbent Lt. Gov. David Zuckerman, a Democrat who also ran uncontested this primary and received 58,965 votes.