As readers may know, legislators recently finalized a mandatory Paid Family and Medical Leave bill (financed by a new payroll tax) that has been a year in the making. This effort has not been without contention; in fact, last May legislative leaders were unable to come to terms on what the final bill would look like, kicking the fight to this year.

Vermont Legislative Republicans have been unified against this bill because we believe it makes our state less affordable — not more — and that the structure of this particular bill is fatally flawed. However, we are not the only ones. Five Democratic Representatives, four Democratic Senators, and four of Vermont’s five Independent Representatives all voted no on this effort last year. Collectively, these officials represent Vermonters from 12 out of our 14 counties. This year, Progressives are joining them in signaling their opposition to this bill. 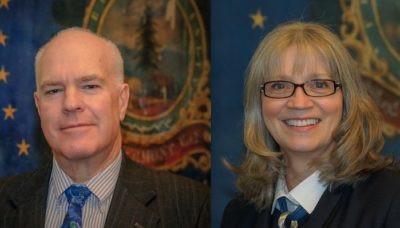 Why are we (and others) so opposed to this particular bill? To be clear, we support Vermont individuals and families having access to paid family and medical leave — if they choose. That is why we both stood behind the Governor’s voluntary plan, which would achieve exactly that. But both the advocates of fiscal restraint and affordability, as well as well as those concerned about the most vulnerable Vermonters, recognize this bill’s mistakes. This legislation is poorly designed, unaffordable, and actually does not protect the most vulnerable. Here is why:

First, the bill would impose a brand-new 0.20 percent payroll tax (plus another 0.38 percent optional tax for temporary disability insurance). That is on top of the sales tax, income tax, property tax, motor vehicle taxes, and more, that Vermonters already have to pay. It amounts to a multi-million dollar tax hike on Vermonters — even if they do not use the program. That is unaffordable, at a time when many Vermonters are unable to make ends meet. And if the costs of the program go up — or if lawmakers decide the current tax rate is insufficient — the payroll tax will go up too. In other words, this creates yet another tax-raising scheme for lawmakers to play with.

Second, the bill does not rule out the state creating a brand new government entity to administer the program, which experts from the executive branch have testified will not only cost millions of dollars, but also will require new government employees and shift the risk of program insolvency onto the taxpayers. In our mind, this will lead to yet another excessive bureaucracy, flawed in the same manner as recent programs like Vermont Health Connect.

Third, the program is a mandate. Governor Scott presented a twin-state, reasonable, and voluntary alternative that leveraged the state employee base of both Vermont and New Hampshire and the ability of Vermont and New Hampshire businesses to all opt-in to the program on a voluntary basis. This increased the size of the pool, helping to lower costs. But Vermonters who could not afford the program (or otherwise were not interested) did not have to pay in. That is not the case in this bill — it is mandatory, whether you like it or not, and the payroll tax must be paid either way.

This bill also leaves tens of thousands of Vermonters behind — a reason some Democrat and Progressive legislators have abandoned their support for it. First, unlike the Governor’s plan, this proposal excludes all self-employed Vermonters and sole-proprietors. For perspective, that means roughly 60,000 Vermonters (or nearly a fifth of our workforce) would not be able to participate. Excluding these thousands of Vermonters both denies them the choice of this important benefit, and could increase program costs by reducing the size of the risk pool.

Additionally, the bill would require Vermonters to have earned income in two of the last four calendar quarters, and have worked at least minimum wage during the last year for a minimum of 675 hours. However, that means the thousands of Vermont workers who received less than $7,400 in income would not qualify for the program. In other words, the most vulnerable Vermonters — those who this program was designed to help — would be left behind, unable to participate. Yet again, this is not the case in the alternative put forth by the Governor. For us and our colleagues across the aisle, restricting access to the poorest Vermonters is a mistake.

Take a look at the wage replacement rate — or size of the benefit — as well. Gov. Scott’s alternative presented a simple and reasonable 60 percent of the worker’s weekly wages as the benefit size. In contrast, this proposal pays 90 percent of wages for up to 55 percent of the Vermont average weekly wage, but then cuts the replacement rate to 55 percent for any earnings above the average weekly wage. This complicated and convoluted formula includes a steep drop in the benefit that does not pay back workers in a manner proportionate to their contribution.

Lastly, we have yet to receive a fiscal note on this bill. A fiscal note is a useful tool for legislators (produced by the nonpartisan Joint Fiscal Office) to tell us how much a proposal actually costs. In spite of not having a fiscal note, the Senate rushed to pass this bill on Friday, January 17. In other words, the entire Vermont Senate was expected to vote on a multi-million dollar payroll tax without having estimates of the costs. That is simply irresponsible.

For all these reasons, we do not and cannot support this legislation. While we recognize the importance of the paid family and medical leave benefit, we stand with our colleagues on all sides of the political spectrum in opposition to legislation that would fail to protect the most vulnerable and impose a new mandatory payroll tax, without having cost estimates. Frankly, Vermonters deserve better than this.

13 thoughts on “GOP leaders: Why we oppose the worst possible paid family and medical leave plan”