During his successful 2016 campaign, state Rep. Bob Frenier didn’t knock on a single door. He didn’t buy TV ads or use other conventional strategies to get name recognition. Instead, he used a classic advertising gimmick made famous in the 1950s — Burma-Shave signs. 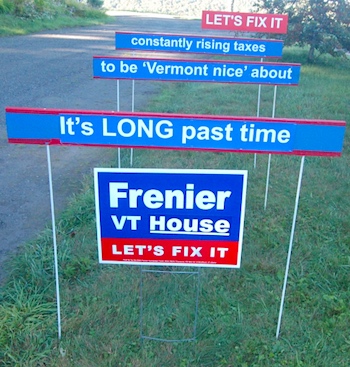 Rep. Bob Frenier, R-Chelsea, wants his GOP colleagues to use the Burma Shave campaign strategy that helped lead him to victory in the 2016 election.

After having edged out Progressive Rep. Susan Hatch Davis by seven votes, Frenier now thinks his signs could provide a path to victory for other GOP candidates.

Like the Burma-Shave shaving cream campaigns of old, Frenier’s technique involves placing small sequential roadway signs with a few words on each at roughly quarter-mile intervals. Each phrase leads up to a final slogan or catch phrase at the end, garnering attention from motorists that conventional ads fail to grab.

“This is a rural mass communications system, and before Donald Trump was getting around the mainstream media with his Twitter account, that’s basically what I was doing with this,” he said.

It’s cost effective, too. Frenier says he spent only $1,320 on his whole campaign. He added that the signs are perfect for people who aren’t good at bragging about themselves or knocking on thousands of doors.

He also sees the signs as superior to television ads, which aren’t region-specific and don’t have the viewership of past decades.

“A lot of people aren’t watching TV,” Frenier said. “The only thing you can really count on Vermonters to do is to get in their car and drive someplace to buy their food and buy their beer and go to work. That’s why it is now effective, and will be effective as long as people are driving the public roads.” 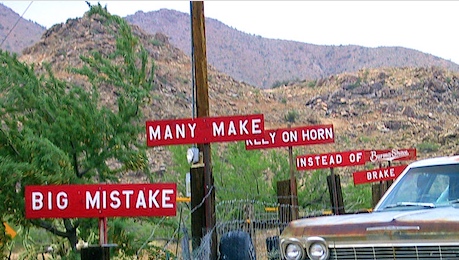 Frenier said he came up with the idea in part because he used to run an advertising agency before he became a firetruck manufacturer.  “That’s the kind of stuff that occurs to you when you work in advertising. I used to advertise on the side panels of milk cartons,” he said, adding that the signs could work for a statewide candidate as easily as a local race.

“Bob had some extra signs and we discussed it, picked a few slogans that I could use for my own campaign, and I got elected,” Ainsworth told True North. “I succeeded in defeating an incumbent.”

One series of sequential signs Ainsworth used read as follows: “Rep. Sarah Buxton voted … to raise your taxes … over & over again … stand by for a carbon tax.” The distance between each message built up suspense and anticipation for motorists passing by.

“We’re lucky because the computer technology hasn’t quite reached everyone up here,” Ainsworth said. “Everybody does go up and down the road, and you are going to hit everyone passing through there multiple times.”

He said Frenier deserves credit for reviving the classic ad campaign, adding that the signs could work for many other GOP candidates.

“I think they should consider it,” he said. “It goes along the idea of Twitter, it’s short messages to the point, it isn’t a long one or two pages that most people won’t stop to read. And the repetition makes them keep thinking about it.”

Earl Everhart, a resident of Williamstown, participated in Frenier’s campaign by putting the signs on his own property.

“It was a series of messages to alert people to his candidacy,” Everhart said. “It’s the old Burma-Shave idea that they read progressively just a few words on each sign and five or six signs in a row.”

Everhart agreed that this may be the most cost-effective strategy to engage voters: “That certainly makes sense, and he can use them for another campaign.”