“If ye love wealth better than liberty, the tranquility of servitude better than the animating contest of freedom, go home from us in peace. We ask not your counsels or your arms.”

For over 240 years, the Fourth of July has been America’s most cherished holiday. We celebrate our nation’s mythology with parties, parades, picnics, barbecues and fireworks. Sky Rockets, Lady Fingers, Fountains, and Weasels light up parks, stadiums, and neighborhoods of urban cities and rural counties. More hot dogs, beer and soda pop are consumed on July 4th than all other holidays. More American flags are flown in neighborhoods around our nation than at any other time of the year. It is the day most Americans display more love for their country than they do for their politics. 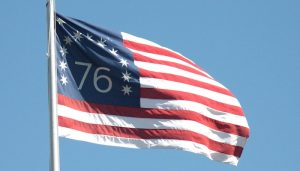 Of all the memorable events that occurred on July 4th, our Independence remains the most salient anniversary we celebrate on this day. It stands for American liberty and freedom. It represents our founders standing up for our rights.

Although July 4 marks the birth of our nation, it wasn’t the only important historical event to take place on that date. The Louisiana Purchase was completed and West Point also opened on July 4. France presented the Statue of Liberty to America in 1884 and “America the Beautiful” was first performed on the 4th day of July in 1895. Two former U.S. presidents, Thomas Jefferson and John Adams, passed away on July 4, in 1826. Baseball great Louis Gehrig retired from baseball on July 4, 1939. And let us never forget it was July 4th, 1996, that Hotmail went live around the globe.

Of all the memorable events that occurred on July 4th, our Independence remains the most salient anniversary we celebrate on this day. It stands for American liberty and freedom. It represents our founders standing up for our rights and vowing to fight anyone who stood in our way of exercising them.

“Be it resolved that these United Colonies are, and of right ought to be, free and independent States, that they are absolved from all allegiance to the British Crown.”

When our founders tested the waters of independence, they knew it would not be easy. Opinions about self-rule were deeply divided among colonial classes. Patriots were few compared to British loyalists. Neutralists felt living under British control was adequate. Although many conceded the British treated them unfairly, they felt it was infeasible that the colonies, could mount a defensive against a powerful English force. Our founders knew actualizing a revolution would not be easy.

Our founders came from all walks of life. Physicians, lawyers, teachers, craftsmen, merchants and growers all brought something unique to America. But it was two prodigal writers that engineered a pivotal role in our founding. Thomas Paine and John Locke codified the language and the ideas to define Americans’ destiny. Paine staged the Revolution with his pamphlet “Common Sense,” and Locke helped convince melancholy loyalists they could defeat the most formidable of British forces.

“The end of law is not to abolish or restrain, but to preserve and enlarge freedom.”

English political activist Thomas Paine wrote for the common man. Upon arriving in America, Paine labored for the Philadelphia Magazine under the pseudonyms Amicus and Atlanticus out of fear for British reprisals. His historic pamphlet, “Common Sense,” was crucial in convincing the colonists to take up arms against England. Paine claimed self–rule was their right and democracy their destiny. During the Revolution Paine authored “The American Crisis.” He read passages of this pamphlet to the troops at Valley Forge.

“We have the power to begin the world over again.”

While Paine cleared the path for the Revolution, English philosopher John Locke worked with our founders developing the methodology and concepts in creating our government. He is known as the father of American political philosophy. Many of his beliefs are incorporated in our Constitution. Thomas Jefferson quoted Locke while crafting the Declaration of Independence. “Life, liberty, and pursuit of happiness,” was the verbiage taken directly from Locke’s Two Treatises on Government.

“No individual should ever be forced to surrender his rights to enter a civil society.”

Out of fear of punishment, colonial newspapers were leery to criticize the British. Under the law of seditious libel it was a crime to excoriate government policies. Although colonial juries refused to prosecute many of those charged, this effectively censored the press. This demonstrates the key rolls that both Paine and Locke played in encouraging the Revolution. The erudite works of these two insightful Enlightenment writers, paved the pathway for the American republican experience.

When our founders wrote our Constitution, they knew freedom of speech was the bulwark of liberty. And they strictly limited the powers of government to protect it. But during ratification the colonies refused to sign on the bottom line without a Bill of Rights. After fighting a bloody war for their liberty, they wanted their rights in writing. And the first written right in the Bill of Rights declared, “Congress shall make no law abridging the freedom of speech or of the press.”

“If freedom of speech is taken away, then dumb and silent we may be led, like sheep to the slaughter.”

Although America has had freedom of the press since our founding, reporters and citizens were restricted by their governments in viewing anything they didn’t want them to see. This only ended because of a one man crusade by Congressman John Moss. On July 4, 1966, a reluctant LBJ signed The (FOIA) Freedom of Information Act into law. This gave Americans unlimited access to most government documents. It mandated the disclosure of non-sensitive information to reporters and the public. This included crime data, court transcripts, investigative reports and much more.

Like Paine and Locke, Moss, a decorated Navy veteran, believed freedom of speech was the bulwark of liberty. He was elected during the Cold War and the government’s classification system had exploded in size. And there was neither a clear right to access government records nor judicial remedy for anyone denied it. But due to Cross’ dedicated 12-year effort, those two principles would form the foundation of the FOIA. But this would have never happened if one man had not believed the American people were entitled to have access to an open government to maintain their liberty.

July 4th is a time we celebrate our liberty and those who delivered us freedom. Our founders were brilliant Enlightenment thinkers and brought numerous talents to America. But they were only able to complete their God-Given mission because of the bold and courageous writers who spread the gospel of liberty. They woke up the sleeping peasants and convinced them to revolt for freedom. Throughout the decades, our reporters, columnists, authors and citizen journalists have been the gate keepers of liberty. They know freedom is not guaranteed. If we don’t protect it, we will lose it.

George Bernard Shaw wrote, “Liberty is the breath of life to nations.” America is the cornerstone of world liberty. It was not built on fear but courage. We are not free by accident. We are free because so many work arduously to keep us free. And we will remain the home of the brave and the land of the free as long as they protect us. There’s no better day than July 4th to salute those watchdogs of our treasured liberties.

“We’re blessed with the opportunity to stand for something; liberty, freedom and fairness. And these are things worth fighting for, worth devoting our lives to.”

4 thoughts on “Op-Ed: Fourth of July more than independence”