Former State Auditor Randy Brock may have distanced himself from Vermont’s political scene since his unsuccessful 2016 run for lieutenant governor, but that doesn’t mean he’s not following what’s going on financially under Montpelier’s Golden Dome.

Brock has been studying fellow Republican Gov. Phil Scott’s proposed $35 million bond for affordable housing, and he has concerns about how state officials will be able to sustain the funding. 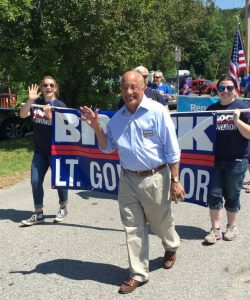 Earlier this year, the governor, along with officials at the Agency of Commerce and Community Development, began trumpeting S.100 as a neat way to employ 1,000 workers, build 500 additional housing units, house 1,000 residents and create $100 million in new construction and renovation projects statewide. Scott champions the plan since it helps meet his first-term agenda goals: create jobs, grow the economy and protect the state’s vulnerable citizens.

In addition, many Vermont mayors, town managers and community leaders are on board with the plan. In a letter sent to Scott and House and Senate leaders last month, a coalition of seven mayors gave their full-throated endorsement.

“Our enthusiasm for the bond and the other elements of the housing proposal (including the downtown tax credits) is rooted in the different needs that exist in our communities,” the mayors wrote. “Some of our cities need reinvestment and revitalization of deteriorated properties, while other communities need new housing to serve our workforce. In all parts of the state we need more housing to protect the most vulnerable Vermonters as well as our senior citizens.”

But Brock, a skeptic of the plan, isn’t a newcomer to the financials of affordable housing. He’s been studying the issue both as a former state senator and state auditor since the early 2000s.

“The net effect of this is that we make investments in affordable housing by having money pass through the Housing Conservation Board and several other agencies that are intertwined,” Brock told True North Reports. “The money goes out to nonprofit community-based agencies to build affordable housing, and it goes in the form of mortgages that are scheduled to be repaid over various periods of time.”

All well and good so far. But Brock cautions that there’s a red flag that few Vermont legislators and those in the affordable housing sector care to mention. This red flag is hidden within the state’s financial statements, according to the former state auditor.

“These housing loans can be made at low or no interest,” he said. “Often they are set up to have a balloon payment at the end of the period, say 10 years, 20 years, whatever.

Brock said that when a loan maturity occurs, the conservation board extends it for another 10 or 20 years.

“The money is never going to be paid back — that’s the red flag,” Brock said.

According to Brock, the problem was first revealed in 2009 when then Gov. Jim Douglas’ “Tiger Team” of financial specialists, led by Tayt Brooks, former state commissioner of housing, uncovered the ballooning problem.

In 2010, the Legislature commissioned an outside consultant to do a study. The conclusion was that all loans needed to be repaid. The consultant also encouraged consolidation among state multiple agencies dealing with housing.

But in 2011, the incoming Shumlin administration and the new Legislature’s Commission on Financing and Delivering of Affordable Housing and Conservation reported that everything was fine and nothing needed to be changed. The 2011 commission dismissed the 2009 Tiger Team report and the 2010 consultant’s report.

“The 2011 report concluded an ‘extraordinary record of achievement’ and we should leave well enough alone,” Brock said. “The housing agencies even defended this practice that repayment wasn’t required, and that you make it more affordable when people don’t have to repay their mortgages.”

Scott’s $35 million approach this year has a fundamental difference from the past, however: it includes a funding source. The money lent by the state will be repaid through tax revenues.

“That’s an important difference, but a concern remains: what about the underlying mortgages? Will the bond get paid?” Brock asks with more than a hint of doubt.

He also wondered if the system could possibly be gamed, such as if a person gets an affordable housing benefit as a low-income earner and later becomes a high-income earner without the state changing the agreement.

“(Some) 15 to 20 years in the future their income may rise. Is there a look-back or an adjustment?” he said. “A person qualifying for a low-income housing loan one year could become a multimillionaire sometime. … I think there are some very important questions that need to be asked.

“If you want a truly sustainable program, you have to put out mortgages that actually get repaid, and then you use the repayments to fund more affordable housing. But when it isn’t being repaid you have to go out and do (another) $35 million housing bond to build more stuff.”