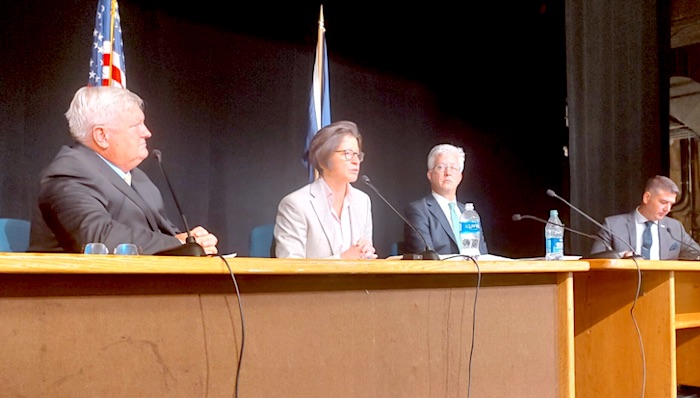 BURLINGTON — Last week, the pro-police advocacy group Keep Vermont Safe held an event to highlight some of the biggest hurdles to restoring public safety in Burlington amid rising crime owed largely to the “defund the police” movement.

Burlington has had 23 shootings so far this year — 12 involved injuries, and three resulted in deaths. The rise has come following City Council’s decision to defund the city’s police force by about one-third in 2020.

“Things are worse than they have ever been in Burlington,” Christina Nolan said. “We should just call a spade a spade — it has never been this bad and the trends are terrifying.

“Every day I hear parents say they would never let their teenagers walk on Church Street anymore. And it’s worse than that, the parents themselves say I just don’t go to Burlington anymore.”

One of the key topics discussed among panel members was qualified immunity. This immunity shields state and local government officials, including police officers, from being sued for doing their jobs should a citizen claim his or her rights were violated.

Nolan suggested it’s a double standard that some lawmakers want these protections lifted for police, but they will not offer to give up the same protection for themselves.

“The very legislators that want to take qualified immunity away from the police enjoy it for themselves,” Nolan said. “Anyone ever think that a legislator has ever made a bad decision? Well, they can’t be sued for those decisions. And when they pass them, they write these laws to take away qualified immunity for the police, they specifically say ‘nothing about this is meant to get rid of our legislative immunity.'”

Hall, a former police chief, offered insight on what removing qualified immunity for police is going to mean for the already difficult recruitment efforts throughout Vermont.

“I can tell from this discussion on my end of this, and from what I’ve heard from law enforcement people, is that if the state of Vermont does this, you will see an exodus of law enforcement probably comparable to what we’re seeing in Burlington, but at a state-wide level,” he said.

Toensing echoed that sentiment, stating that if qualified immunity is lost in Vermont, “every single police department in Vermont will probably drain itself of any sort of talent.”

Nolan also spent some time discussing the proposal of legalized prostitution and the effects that would have on women’s safety.

“We’re also going to attract human traffickers to Vermont, and more women are going to be raped and abused in the prostitution contexts if this is legal — because the abuser is just going to say, ‘well, this was a legal transaction,'” she said.

Nolan also warned about Fentanyl continuing to be the dominant concern among street drugs, due in part to only a minimal amount can get the user high, and it doesn’t take much more to be deadly.

“Fentanyl is the drug that is killing nearly 100,000 Americans a year and over 200 Vermonters a year,” she said. “… It is incredibly deadly. Just two milligrams of Fentanyl which is the size of the two-grains of salt will kill the average person.

“Right now, a federal prosecutor can’t charge a five-year mandatory minimum unless they have 40 grams of fentanyl. … Now that is 20,000 lethal doses.”

Hall said morale is down in police work due to the constant demonizing of police, and that it is becoming an obstacle to recruitment.

“Imagine waking up every morning whether you work in the grocery store, in a factory, or anywhere for that matter, and you woke up every morning knowing that the people that you worked for … don’t appreciate you, want to defund you, and want to look at any opportunity they can to take your livelihood away from you,” Hall said.