The ranks of Vermont’s unemployed have swelled in recent weeks as workers have sought to file claims after seeing their jobs disappeared due to COVID-19. Just two weeks ago, nearly 10,000 new Vermonters filed for unemployment. This was nearly 20 times the number of new claims filed a month ago. However, that 10,000 number was actually lower than either of the two weeks prior, over 14,000 for the week ending on March 28 and about 16,500 for the week ending on April 4.

For each of the past four recorded weeks, most of those who initially filed claims have been forced to stay on unemployment, though a few have been able to find other jobs. As a result, the total number of unemployed folks has risen each week. 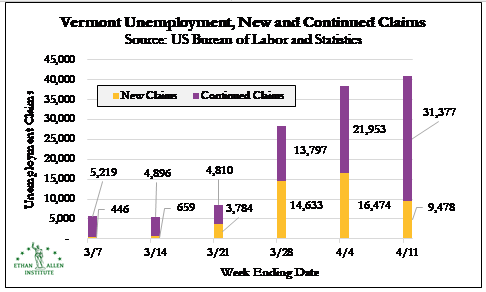 On the bright side, our unemployment insurance trust fund is sitting pretty at No.1 in the country. The Tax Foundation calculated that Vermont could afford to pay out unemployment for two and a half years. This stands in stark contrast to our ranking on funding our pension plans. Vermont only 64% funded as of 2019, a number that is sure to decline after investment opportunities for high returns dry up in the aftermath of COVID-19.

While monitoring the number of new cases and deaths from COVID-19 is important, so too is monitoring Vermont’s employment situation. Our government has an obligation to consider both lives and livelihoods as they consider when to reopen our great state.