Most of us who have spent time online have seen at least some variation of the “flatten the curve” graphic. The idea is simple: Individuals and governments must take steps to spread the coronavirus at a slower rate, or our health care system’s capacity will be overwhelmed by infected patients.

The vast majority of Vermonters and Americans began taking precautions weeks ago, such as frequent hand washing and social distancing. But the cases of COVID-19 kept popping up, and Vermont’s government scaled up its response.

Gov. Phil Scott issued a “stay-at-home” order on March 24, saying “I fully recognize the emotional, financial and economic impact of these decisions, but based on the best science we have available, these measures are necessary.” Such a statement implies a relatively easy choice: we can choose saving jobs or saving lives. If we want to “save lives,” then we will of course choose saving lives. But is the choice of life over employment really that simple? 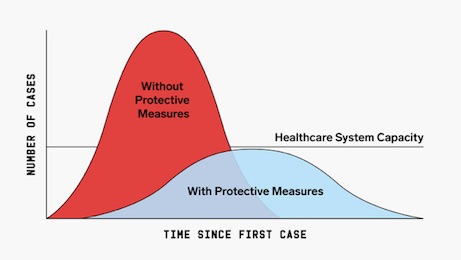 FLATTENING THE CURVE: In the “flatten the curve” graphic, social distancing is used to prolong the course of the pandemic to make it manageable for the health care system. Without social distancing in place, the virus hits harder and faster, but also ends sooner.

A University of California professor found that each employee who gets laid off loses 1.5 years of their lifespan. And a University of Munich study found that women who become unemployed are at greater risk of domestic violence. Since March 16, 2020, the National Domestic Violence Hotline has received more than 2,000 calls in which COVID-19 was cited as a condition of abuse. High school students who miss three or more days a month are seven times more likely to drop out before graduating and, as a result, live nine years less than their peers, according to a Robert Wood Johnson Foundation report.

And perhaps most disturbingly is the increase in suicide due to unemployment. WCAX recently reported an uptick in suicides in Vermont during the stay-at-home order. During the 2009 Recession, the U.S. suicide rate jumped when unemployment hit 10%, resulting in 4,750 more deaths. We already lose almost 100 Vermonters to suicide each year. What happens if Vermont’s unemployment quadruples?

Trying to construct a neat little graph with all of these components would be impossible. We will never know how many more Vermonters have years knocked off their lives, never know how many cases of domestic abuse occurred, how many more high schoolers dropped out a year or two later due to the stay-at-home order, and how many suicides could have been avoided were it not for the order. There is a trade-off here, one that does not mean we should only count the lives lost to COVID-19. This implies that that reopening Vermont’s economy before the number of lives lost from COVID-19 reaches zero may actually save lives, on net. Job loss means lives lost.

4 thoughts on “Flemming: Counting the lives lost to flatten the curve”