Sen. Bernie Sanders’s struggle to defend some of his lofty proposals at Tuesday’s debate raises questions about some of his other ideas, namely those stemming from his version of the Green New Deal.

“Generating revenue from the wholesale of energy produced by the regional Power Marketing Authorities. Revenues will be collected from 2023-2035, and after 2035 electricity will be virtually free,” according to the memo on the Sanders campaign website. 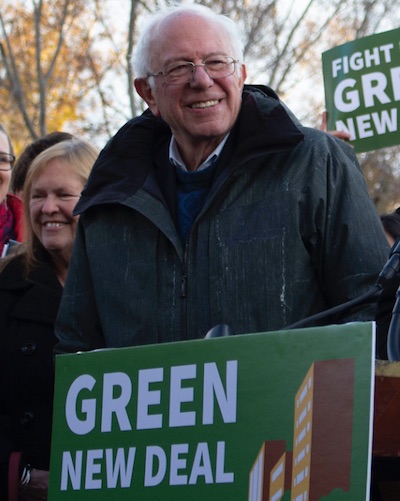 Sen. Bernie Sanders, I-Vt., is a proponent of the Green New Deal. The cost of electricity under Sanders’s plan is dependent on operation and maintenance costs, which could be substantial.

It contained one significant caveat.

The cost of electricity under Sanders’s plan is dependent on operation and maintenance costs, the memo notes, which could be substantial if past reports are any indication. Critics say Democratic New York Rep. Alexandria Ocasio-Cortez’s Green New Deal would force American taxpayers to shell out trillions of dollars over the next decade to pay for the transition.

The resolution called for “10-year national mobilizations” toward addressing climate change. A fact sheet published alongside the proposal said the plan would “mobilize every aspect of American society on a scale not seen since World War 2.”

Ocasio-Cortez’s GND would reportedly phase out fossil fuel usage within 12 years, but could cost tens of trillions of dollars, some reports show. Americans could be forced to pay up to $93 trillion to implement the proposal over a decade, the conservative-leaning American Action Forum (AAF) noted in a study in February 2019.

“What the Sanders proposal would do is create an 800-pound federally owned power gorilla that would make it very hard for the existing generators to compete,” Josh Freed, head of energy and climate policy at Third Way, said in a Feb. 2 Politico report. Third Way opposes Sanders.

Freed added: “I think a plan like this could turn off voters in large parts of the country. It would have challenges in Pennsylvania, Michigan — a lot of the states that are competitive for the election.”

“Is Medicare for all, universal health care, some kind of communist radical agenda?” Sanders asked in response at one pint in the debate. He also took great pains to explain how he would pay for his Medicare-for-all proposal.

Sanders’s campaign has not responded to the Daily Caller News Foundation’s request for comment.

9 thoughts on “Flashback: Bernie Sanders says his Green New Deal can make electricity ‘virtually free’ by 2035 — but there’s a catch”