Editor’s note: This commentary is by Adam Greshin, Vermont Commissioner of Finance & Management.

Gov. Phil Scott believes we can make our education system the very best in the country, if we have the courage to rethink the current system, which is diverting valuable budget dollars away from kids and increasing the tax burden at an unsustainable rate. 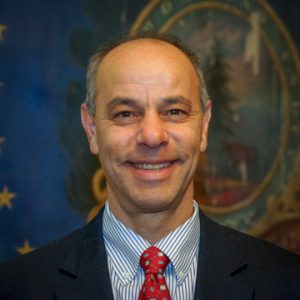 Adam Greshin is the Vermont Commissioner of Finance & Management.

The K-12 system was built to educate more than 100,000 kids. Today, we’re educating about 76,000. For 20 years, we’ve been serving, on average, three fewer students every day. Our student-to-staff ratio has decreased from about seven kids for every one adult to four to one. And, property tax rates have increased almost every year.

These trends create inefficiencies that divert millions of dollars away from our kids, expand the inequality between schools and make Vermont less affordable. And they will continue, unless we act to reverse them.

That’s why the governor proposed a multi-year solution that uses bipartisan ideas – some already passed by the Legislature. The plan generates hundreds of millions of dollars in savings over the next five years, which would be invested in holding statewide tax rates level and in more and better childcare, technical education, K-12 programs and higher ed – creating a “cradle to career” system that’s the best in the country. This is the type of education system we need to attract working families and strengthen our economy.

I’m proud to serve on the team of policy experts and data analysts who developed this plan. We understand people have questions and are hearing misinformation. So, we want to set the record straight.

First, this plan fully funds the school budgets approved by voters and does not add costs or remove revenue from the Education Fund. In fact, it calls for an additional investment of surplus funds to prevent an increase in statewide property tax rates. Local school boards have done their part. Now the state must do its part to prevent unnecessary rate increases in a year when we have a $55 million surplus.

Second, using retirements and other natural attrition, we propose to help schools incrementally increase student-to-staff ratios over five years, beginning in 2020. At the end of this transition, Vermont will still have the lowest ratio in the country (about five students to every adult). We can do this without a mandate or layoffs.

Third, a statewide healthcare contract for school employees would be beneficial for employees and taxpayers. The patchwork of locally negotiated healthcare arrangements has driven up premium costs and created major problems in administering the plans. The teachers’ union previously insisted on these locally negotiated arrangements, but we’re encouraged they now recognize a statewide framework is a more responsible path forward.

Fourth, we cannot continue to ignore growing inequity in our system. Currently there is a concerning disparity in per pupil spending between districts, and the mechanics of the Education Fund mean low spending districts are subsidizing high spending districts. The plan mitigates this by lowering existing Excess Spending Thresholds (EST) over five years. This will encourage high spenders to slow growth or require them to pay a little more in their local tax rate to avoid shifting their costs to other districts.

Smart and incremental modernization of our education system will achieve nearly $300 million in savings that can be reinvested in educational opportunities. Overall, this plan gives the state the opportunity to manage the largest expenditure in state government and implements the kind of long-term planning rating agencies seek when evaluating our fiscal management practices.

Fortunately, with $55 million in surplus revenue, we can easily come to an agreement that provides some relief to tax payers and improves an education system that has the capacity to be the very best. And, as Gov. Scott points out, having the best education system in the country would be the best economic development tool we could have.

Images courtesy of Wikimedia Commons/Public domain and state of Vermont