Federal officials restored a Bible to a prisoner of war display at a veterans hospital and said it “will not be bullied” by an activist group that wants it removed.

Department of Veterans Affairs staff at the Manchester, New Hampshire, veterans hospital “temporarily removed the Bible from the display out of an abundance of caution” after receiving a complaint, the VA’s national headquarters said in a statement Tuesday. 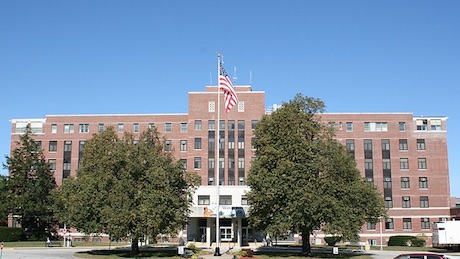 The Bible is part of a display in the hospital’s lobby honoring prisoners of war and missing soldiers.

A nonprofit called the Military Religious Freedom Foundation filed a lawsuit Tuesday to remove the Bible permanently. “This is an action requesting injunctive relief pursuant to the first amendment of the Constitution of the United States of America. The plaintiff, James Chamberlain, and others are seeking the removal of a Christian Bible from the POW/MIA table in the entrance way of the Manchester VA Medical Center,” it says.

The lawsuit says Chamerlain is a “devout Christian” and veteran but “despite his strong personal religious beliefs, he believes that the Christian Bible has no place being displayed on the POW/MIA table.”

It says 14 other veterans also complained.

The hospital removed the Bible after the nonprofit initially complained in January, according to the lawsuit, but then the Bible returned in a “locked plexiglass box,” which it called “even more objectionable.”

“This lawsuit – backed by a group known for questionable practices and unsuccessful lawsuits – is nothing more than an attempt to force VA into censoring a show of respect for America’s POW/MIA community. Make no mistake: VA will not be bullied on this issue,” Curt Cashour, press secretary for the VA, said in a statement.

The Military Religious Freedom Foundation did not immediately return a request for comment.

The Manchester VA has been the site of significant criticism for poor service and mismanagement. After a July 2017 Boston Globe expose, New Hampshire Republican Gov. Chris Sununu stepped in to permit VA doctors to treat patients at facilities outside the VA.

“Only in 3rd World countries is it common to see patients end up as disabled from myelopathy as the ones who have been showing up after referral from you,” one doctor told a Manchester VA physician.

The hospital’s chief of medicine Stewart Levenson told the Globe his efforts to fix the system by working through the bureaucracy went nowhere. “I have never seen a hospital run this poorly — every day it gets worse and worse,” he said.

4 thoughts on “Feds apologize after Veterans Affairs removed Bible: ‘Will not be bullied on this issue’”