BURLINGTON, Vt. — A federal judge on Wednesday dismissed a lawsuit against Vermont Secretary of State Jim Condos aimed at preventing mail-in ballots from being sent automatically to all active, registered voters beginning next week.

Judge Geoffrey Crawford, chief judge of the U.S. District Court for the District of Vermont, heard a case Tuesday over Zoom in which an attorney for five plaintiffs argued that legitimate votes would be diluted if the new universal vote-by-mail system in Vermont leads to mailing errors, mistaken votes or even voter fraud.

During the hearing, attorney David Warrington said one of the plaintiffs failed to receive a ballot for the primary election, and he added that an inaccurate checklist, lack of signature verification, voter errors and outright fraud have the potential to disenfranchise voters on a mass scale. 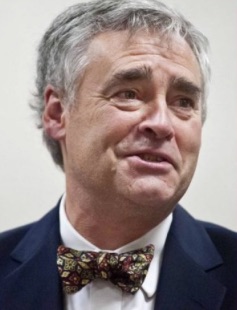 Crawford, a former a Vermont Supreme Court justice from Burlington, dismissed the case on the grounds that individual plaintiffs had not yet been injured and therefore didn’t have standing to bring a lawsuit against Condos.

“The ‘injury in fact’ must have been ‘concrete and particularized’ and also ‘actual or imminent,’ not conjectural or hypothetical,'” he wrote in his order.

The judge said the plaintiffs lacked standing because if voter mistakes or fraud happen, those instances will not injure the plaintiffs directly, but would dilute the total number of votes cast by all voters in a fractional way.

“A vote cast by fraud or mailed in by the wrong person through mistake has a mathematical impact on the final tally and thus on the proportional effect of every vote, but no single voter is specifically disadvantaged,” Crawford wrote in the 11-page ruling.

According to the Secretary of State’s office, ballots for the Nov. 3 election will be sent out Monday, Sept. 21 and should arrive at voters’ addresses any time after that date through early October. Voters who do not receive a ballot by Oct. 1 are encouraged to contact their local town clerk to get one.

Attorney Deborah Bucknam, a former candidate for attorney general who is frequently at the center of constitutional fights in Vermont, was the lead lawyer for the plaintiffs. But on Tuesday it was Warrington, a Washington, D.C.-based attorney, who did most of the talking for the group.

Warrington said the complaint didn’t contest whether mail-in ballots are a good way to vote. Instead, he argued that automatically sending ballots to all registered voters lacks the necessary protocols to protect election integrity and voters’ rights.

“He’s changing the law on the fly,” Warrington said of Condos.

Warrington said if an individual voter alleges facts about the election system that place him or her at a disadvantage, that provides legal standing for this case. The question of standing was the primary subject of debate throughout the hearing Tuesday.

The five plaintiffs in the case were Tracey Martel, Robert Frenier, Brian Smith, Raoul Beaulieu and Mary Beausoleil. Smith is a current state representative, Frenier is a former representative, and Martel is the town clerk for Victory, a town that has been at the center of election controversies over the years regarding its checklist.

Philip Back, the attorney representing the Secretary of State’s office, argued that mistakes will happen, but voter fraud should not.

“Inevitably, someone may not get a ballot if it’s lost in the mail or maybe there is an address change — we’re not going to say that there’s not going to be any mistakes,” he said. “What’s important is that nobody votes twice.”

In Georgia, Secretary of State Brad Raffensperger confirmed that at least 1,000 Georgians voted twice in the state’s primary. The individuals used absentee ballots to vote remotely and then voted again in person on election day.

Warrington said that the postcards sent out by Condos’ office in July to notify people about the mail-in voting policy raised red flags concerning the integrity of the voter checklist.

The plaintiffs in the case provided multiple examples for the court to consider, according to Warrington.

In support of the plaintiffs, Scott Gessler, Colorado’s secretary of state from 2011 to 2015, submitted expert testimony to the court to warn against Vermont’s mail-in system. Gessler had overseen his state’s transition to a vote-by-mail system.

“Vermont is not ready for an all-mail ballot system,” he wrote. “It does not have a signature verification to ensure election integrity, nor does it have cure procedures that would prevent inadvertent disenfranchisement resulting from voter mistakes. And Vermont does not have accurate mailing addresses for many voters. … The state’s plan to send a mail ballot to every single active voter creates an unacceptable risk of vote dilution and disenfranchisement.”

Judge Crawford dismissed the case without prejudice, meaning plaintiffs are free to return to the court with a new complaint in the future.