By David Jacobs | The Center Square

Chief Justice John Roberts provided the pivotal swing vote when a divided U.S. Supreme Court ruled the act, also known as “Obamacare,” constitutional in 2012. The 5-4 majority decision rested in large part on the idea that the monetary penalty for failing to buy insurance was included in the federal government’s power to tax.

In 2017, Congress reduced that penalty to zero. Plaintiffs challenging the law, including Louisiana Attorney General Jeff Landry, argue that since there’s no longer a tax penalty, the mandate is unconstitutional and should be thrown out along with the rest of the law. The original lawsuit was brought by the state of Texas. 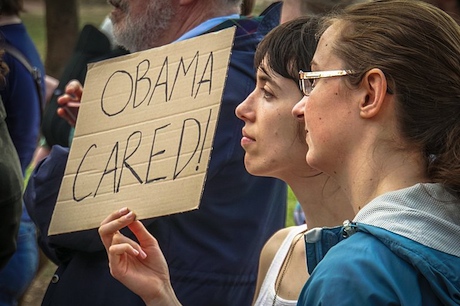 Obamacare has its supporters, but since its passage consumers are experiencing escalating premiums, limited plan choice, and increasingly restricted access to doctors and hospitals.

A federal trial court last year ruled the mandate, and consequentially the entire law, unconstitutional. At the New Orleans-based Fifth Circuit Court of Appeals, attorneys representing the Democrat-led U.S. House of Representatives and states led by Democratic attorney generals argued that even if the mandate is unconstitutional, the rest of the ACA, also known as “Obamacare,” should be allowed to stand.

Elrod said Congress could have included a “severability clause” when it originally adopted the law in 2010, but instead chose to emphasize the mandate’s importance.

“It seems like they did the opposite,” she said. “If you don’t have the tax, why isn’t it unconstitutional?”

An attorney from California’s Attorney General’s office argued Congress settled the question of whether the mandate penalty can be severed from the law by eliminating the penalty and leaving the law intact.

Robert Henneke of the conservative Texas Public Policy Foundation, who argued against the law, was the only attorney to speak with reporters after the hearing. Henneke represented two individuals who are challenging the ACA, and he expressed confidence the judges would uphold the lower court ruling that the act is entirely invalid.

He called the mandate an unconstitutional “command to purchase health insurance.”

“It was the engine of the ACA,” Henneke said.

While the appeals court considers its decision, which will likely take at least a few months, the federal government says it will continue to enforce the ACA. The court has several decisions on its plate.

It must decide whether the various parties have standing to even bring the lawsuit or intervene in the case. For example, can the two individuals represented by Henneke claim they have been injured by the law, since there no longer is a financial penalty to compel them to comply?

It will consider whether the mandate remains constitutional. The plaintiffs argue the requirement to produce revenue was essential to the Supreme Court finding the mandate a valid exercise of Congress’s power to tax. Take away the revenue, they argue, and the mandate is a command to purchase insurance, which the Supreme Court majority said would go beyond Congress’ power to regulate interstate commerce.

And finally, they must decide if any or all of the rest of the ACA can be saved if the mandate cannot.

If the court only invalidates the mandate, little would change, since the law currently functions with a mandate that has been neutered.

It could also take the position the federal government took at the trial court, invalidating the mandate and the protections for people with pre-existing health conditions but leaving federal funding for subsidies and Medicaid expansion intact. Many Louisiana lawmakers would be happy with that outcome, since a new state law maintains many of the ACA’s protections but lacks the hundreds of millions of dollars needed to keep subsidies intact.

If the entire law is thrown out, the effects would touch nearly every aspect of health care and the insurance marketplace.

Whatever the Fifth Circuit’s decision, it is highly likely to be appealed to the U.S. Supreme Court. And that decision could come down in 2020, shortly before the next election.