President Donald Trump said at his Montana rally Thursday that NFL ratings are down 20 percent since players started kneeling or sitting during the national anthem to protest police brutality.

“They’re down 20 percent since this whole thing started with the flag and the anthem,” Trump said.

Trump’s figure is a little off, but NFL regular season television viewership was down 17 percent in 2017 compared to 2015.

The NFL announced in May that it would require players to stand during the national anthem if they are on the field. Under the new policy, teams will be fined if their players or personnel protest during the anthem, but players have to option to remain in the locker room. 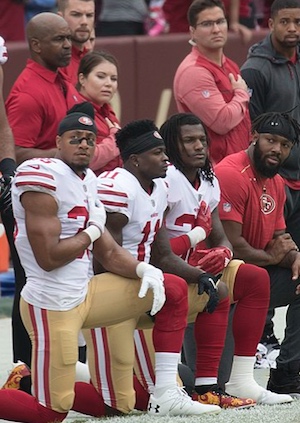 Until President Donald Trump decided to speak out against it, the take-a-knee protest movement had spread from the NFL to college sports and elsewhere.

Trump criticized the rule at his rally. “If you don’t respect the flag or if you don’t like the country or whatever it is, just go into the locker room,” he said. “I think in many respects, that’s worse. Isn’t that worse than not standing?”

He said that NFL ratings are down in part because of the protests, but also because viewers find politics more interesting.

“Their ratings are down 20 percent. But you know why their ratings are down? Yes, the flag. But they’re also down because people find politics, in other words, hitting Trump … to be much tougher, meaner and more interesting than watching a football game,” Trump said. “And they’re watching the cable networks instead of watching football.”

Trump is right that NFL viewership is down significantly – but it is not quite a 20 percent drop.

Former San Francisco 49ers quarterback Colin Kaepernick sparked a movement of players protesting police brutality during the national anthem. He started to sit during the anthem before preseason games in 2016, but then later decided to kneel after talking to former Army Green Beret and NFL long snapper Nate Boyer.

It is not clear how much of an impact the protests had on the decline in viewership, but surveys show that a portion of viewers tuned out because of them.

A February survey from UBS, an investment banking firm, found that 50 percent of respondents who watch less football said that they do not approve of the anthem protests. A September 2017 Seton Hall University poll found that 52 percent of those tuning out of games cited players not standing for the national anthem.

Another poll from the Winston Group found that NFL favorability ratings dropped 31 points among 34 to 54 year-old men from August 2017 to September 2017. NBC Universal’s head of advertising, Linda Yaccarino, said that she thinks that the protests have hurt ratings. “I don’t think there’s any way to prove it, but I do think it has affected the ratings,” she said in November.

Austin Karp, assistant managing editor at Sports Business Daily, told The Daily Caller News Foundation that there is no empirical evidence suggesting that the anthem kneeling protests are responsible for the drop, however. Most analyses blame a variety of factors, including a decline in television viewership and less interest in professional football in general.

Americans are watching less traditional television overall and are migrating to streaming services or other activities – particularly younger generations. A September 2017 Pew Research survey found that 61 percent of young adults primarily watch television through online streaming services rather than a digital antenna, cable or satellite subscription.

Karp noted that NFL games are still more popular than other television shows. NBC’s “Sunday Night Football” was the top-rated series for the seventh year in a row for the 2017-2018 season.

“NFL games now occupy even more slots on the list of the 100 most watched programs every year,” Karp said in an email. “People are watching less scripted TV. The live TV that people are watching is sports, and most popular among those remains the NFL, by a wide margin.”

Networks also argue that they do not get full credit for total live program viewership because Neilsen ratings do not fully capture the number of people watching live events through streaming services.

There is truth to Trump’s claim that NFL ratings are down in part because viewers are watching more news. Neilsen data showed that national cable news saw a 44 percent increase in viewership among adults in 2016 over 2015. NFL executives blamed poor viewership in 2016 on the presidential election, and saw an uptick in viewership in the weeks after the election.

Michael Mulvihill, vice president of research at Fox Sports, said in a series of tweets in February that there seems to be a correlation between increased news viewing and NFL ratings through 2017, too. Since Trump announced his candidacy for president, “news viewership grew by 700 billion minutes, or one-third. NFL viewing declined by 73 billion minutes or -19%,” he said.

2 thoughts on “Fact Check: Are NFL ratings down 20 percent in the take-a-knee era?”