An elections commission set up by President Donald Trump has garnered opposition from states such as Vermont, but the Democrat founder of a national, nonpartisan elections watchdog group says voter fraud — especially regarding the use of absentee ballots — is a serious problem that needs to be investigated.

“Voter fraud is not what I suspect the states may be protecting; what I think they may be protecting in some cases is wholesale absentee fraud,” Bev Harris, founder of Black Box Voting and director of the 2006 HBO documentary “Hacking Democracy,” told True North. 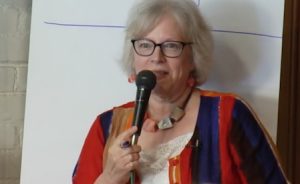 As an example, Harris cites California, where an unusual amount of 2016 primary voters were told they had already voted.

“There are tons of reports of people going to the polling place and they are told that they have already absentee voted,” she said. “The state said it’s against the law to account for the provisional ballots and there was something like 300,000 of them.”

Harris said a large number of absentee ballots can be a concern.

“That opens up a huge hole to allow a company to simply use the names on the voter list,” she said. “You (the ballot printer) can go through and find the people who don’t very often or never vote and just stick vote by mail ballots into the pool using a mail merge program — this is computer stuff.”

She said Vermont’s low number of provisional ballots “does not point to the runaway abuse of the vote-by-mail system,” but added that the state’s refusal to reveal voter checklist information is not reassuring.

“If they resist the information that is not a privacy risk, that is public information, then I really would start looking at vote-by-mail fraud being covered up,” she said.

Vermont’s statewide checklist has plenty of outdated voters. One candidate for state representative after the 2016 election found that the voter checklist was littered with invalid names. Absentee ballot voting isn’t without controversy, either. In November, 17 towns reported illegal absentee ballot requests from Vermont Democratic Party.

Vermont Secretary of State Jim Condos says the state’s absentee ballot voting process makes it difficult to commit voter fraud. In order for an absentee ballot to count, it must be returned in a certificate envelope with the voter’s name, residence and signature.

Once received and counted, the voter’s name is checked off the town’s list, and a polling location checklist should prevent the voter from casting more votes.

“The only way a person other than the person the ballot is intended for could return the voted ballot is if they perjure themselves on the certificate envelope by recording the name of a registered voter and forging the signature of that voter,” Condos told True North Reports in an email. “Perjury carries a fine of up to $10,000, 15 years in prison, or both.”

He said that anyone attempting to cheat this system would have to know which voters have no intention of showing up at the polls. He added if any Vermont voter goes to a polling location and is told his or her vote has already been cast, he wants to know.

“I have instructed all of the town clerks to notify my office in this case,” Condos said. “The two instances I have heard of this occurring have been instances of elderly voters who have forgotten that they did, in fact, return an absentee ballot. If a legitimate case of this were reported to our office and/or the attorney general, it would be investigated.”

On the matter of turning over voter roll information, Condos told True North he’s not for it.

“As a legal matter, at the very least, to provide any of the requested information that is exempted from public inspection under Vermont Law would be a violation of those individuals’ privacy,” he said. “Under Vermont law, a person’s date of birth and the last four digits of their Social Security number are exempt from public inspection under the Public Records Act and the election law, and I would consider their release to therefore be a clear violation of a voters’ privacy.

Harris said another area worthy of election inspection is electronic voting. Harris made a name for herself by investigating vulnerabilities in electronic voting machines, something the Trump administration originally wanted as part of the commission’s investigation.

“The White House on at least two occasions said they were also going to look into hacking,” Harris said. “And then the members of the panel backpedaled furiously on that, and I thought that was interesting.”

A famous scene from Harris’ documentary shows how easy it is for AccuVote OS tabulator machines to be hacked via the removable memory cards.

Harris said it helps Vermont that the paper ballots are public record, so ballots can be counted by hand if deemed necessary.

Harris also expressed concern about LHS Associates, an election services company based in Salem, NH, which both prints the absentee ballots and programs the electronic vote tabulators for Vermont. Harris calls these election companies “middlemen” with less oversight.

“The ballot print firm often outsources to these middlemen, and there’s no public record of it because the checks they write are not public record because they are not a public company,” she said,

According to Ethan Allen Institute President Rob Roper, taking advantage of the absentee ballot may be relatively easy in Vermont.

“Let’s say you have an adult child taking care of a parent who’s got Alzheimer’s disease, and they’ve requested an absentee ballot for that parent and fill it in without any understanding of the will of the parent — that’s voter fraud, is it not? So how do you know if that takes place?”

But Roper added that Vermont’s top elections official is making every effort to do the opposite: “(Condos) has gone to the attorney general, apparently, to find some advice on how to not turn over some information.”