There’s no doubt that one of the flashpoints of the modern culture war in America is the debate over our nation’s history.

On one side, there are Americans who believe that the United States is a unique country, a shining city upon a hill that while flawed, has been exceptional from the beginning.

On the other side is a growing bloc of Americans who believe America was rotten from its conception, its history worthy of both figuratively and now literally destroying, and that its only hope is in some kind of fundamental transformation to purge it of its past sins and injustices.

In simpler terms, it’s a battle of gratitude vs. grievance. 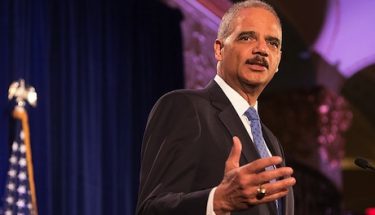 Few perhaps represent the grievance side better than former Obama Attorney General Eric Holder, who took the opportunity on Wednesday to scoff at the concept of “Make America Great Again.”

“Exactly when did you think America was great?” Holder said on an MSNBC panel in response to supporters of President Donald Trump.

Apparently, greatness is entirely dependent on the norms of 2019.

Perhaps one of the most profound rebukes to Holder and those who share his view are the words of Frederick Douglass.

Douglass had been born a slave in Maryland. Having received cruel treatment from several masters, he later escaped.

He had more reason than any American today to hate his country and the Founding Fathers.

Douglass delivered his famed speech “What to the Slave is the Fourth of July?” at a time when slavery not only existed in America, but was spreading. Yet in that speech he said that America and the men who founded it were truly “great.”

Douglass pulled no punches when it came to slavery, which he considered a great hypocrisy in light of the Founders’ statement that all men are created equal. Yet this great sin did not convince Douglass that America’s foundations were hopelessly flawed.

“I am not wanting in respect for the fathers of this republic,” Douglass said. “The signers of the Declaration of Independence were brave men. They were great men too—great enough to give fame to a great age. It does not often happen to a nation to raise, at one time, such a number of truly great men.”

Douglass insisted that the Founding generation was worth celebrating for all time.

“With them, nothing was ‘settled’ that was not right. With them, justice, liberty and humanity were ‘final;’ not slavery and oppression. You may well cherish the memory of such men. They were great in their day and generation.”

America, in the eyes of Douglass, had always been great. To say otherwise was nonsense.

Douglass understood the difference between his country’s timeless ideals and its failure to live up to them. He only demanded that Americans, if they wished to remain in an exceptional country, uphold the sacred principles that their ancestors had bravely fought for.

It’s through this kind of patriotic criticism that Douglass convinced many of the need to extinguish the evil of slavery, or the promise of their nation would fade and crumble.

Later, when slavery was defeated, Douglass looked back not with contempt, but with gratitude for the country and fellow citizens who made such an achievement possible.

He hoped that this sentiment of thankfulness would “never die while the republic lives.”

So Americans today, who will never feel the sting of slavery, who all have the monumental privilege of living under the Constitution and the stars and stripes, should be thankful and cherish our founding ideals and the advancements we’ve made to live up to them.

Surely, America was great when a handful of Pilgrims arrived on our shores and through toil, hardship, and prayer planted the seeds of liberty in the New World.

America was great when a few colonists at the edge of the world pledged their lives, fortunes, and sacred honor to the cause of independence, based on the timeless concepts of inalienable, God-given rights and the notion that “all men are created equal.”

America was great when more than half a million of our countrymen gave their lives in a civil war so that others could be free and their nation might remain one.

America was great when, miraculously, it climbed out of the wreckage of a civil war that would have destroyed most other peoples, and rebuilt itself, ultimately becoming stronger and freer than it had ever been.

America was great when it harnessed free enterprise and the rule of law to produce the most explosive and dynamic economy known to man, allowing the common man to rise up into success, drawing millions from around the world desperately seeking a better life.

America was great when it stood in World War II as the prime bulwark of freedom and unleashed the arsenal of democracy against Axis powers, which would have plunged the world into darkness and barbarity.

America was great when it engaged in the long twilight struggle against communist powers, and showed the world an alternative to the despair of godless collectivism—and won.

If that nation is not great, then no nation has even been great.

Yes, there have been injustices in our history, and there have been moments we aren’t proud of, but that in no way outweighs the profound accomplishments of this country or what it ultimately stands for.

America has not been, nor will ever be, a perfect country. If that is the standard by which our greatness is measured, then it will surely always fail.

We live in a fallen world, after all.

Worse, if we don’t accept that we will never be perfect, we risk being paralyzed by the grievance and self-loathing that already plagues a growing number of our fellow citizens.

In loathing the past, we darken our future, and cloud the genuine triumphs that have helped create the present.

So Americans have a choice.

We can decide to build on the incomparable successes of our past, celebrate what made us who we are, and firmly fix our gaze on an even greater future, as all generations of Americans have done.

Or, we can plunge ourselves into bitterness like Holder, who, despite having been given so much by this country, remains contemptuous of the fact that America never met his standard of perfection.

If America is to be great and remain great, the former ethos must triumph over the latter.

This is the simple but profound crossroads our nation faces.

8 thoughts on “‘Exactly when did you think America was great?’ says Eric Holder. Here is the answer.”