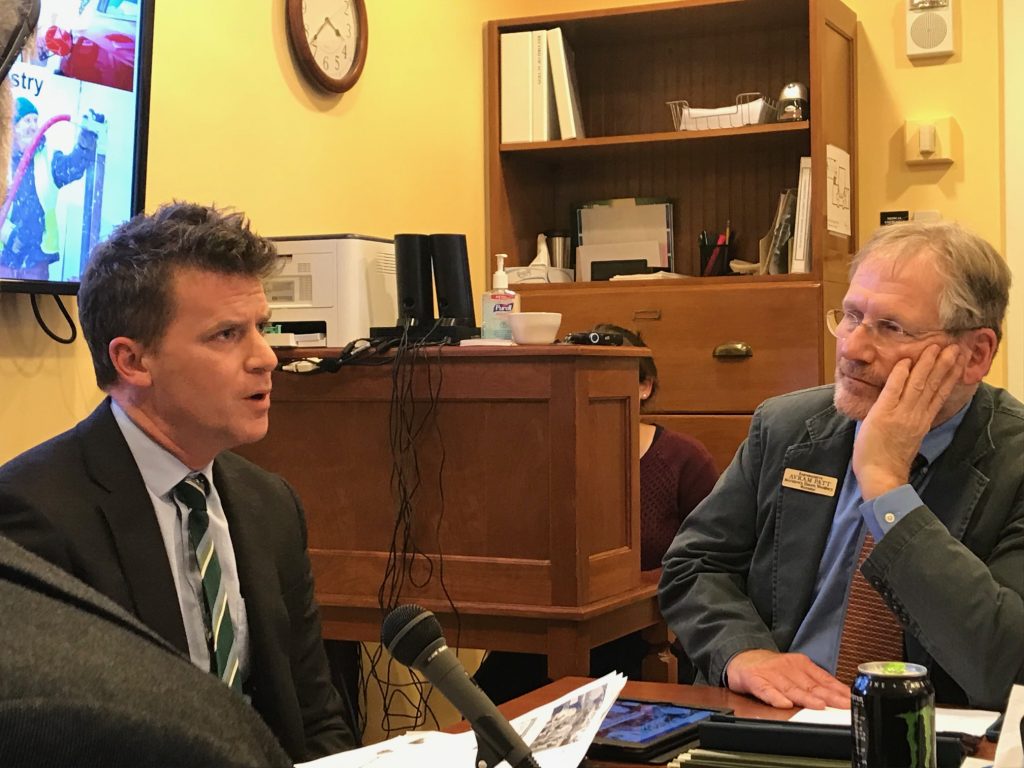 MONTPELIER — Two leading energy policy professionals spoke before the House Energy and Technology on Tuesday to analyze a state-funded decarbonization study that downplayed the potential cost of global warming policies.

Peter Walke, deputy secretary for the Agency of Natural Resources, spoke on how carbon-cost-setting incentives could be implemented. Matt Cota, executive director of the Vermont Fuel Dealers Association, discussed why Vermont needs conventional fuels for the foreseeable future.

Walke, who chaired Gov. Phil Scott’s Vermont Climate Action Commission — and also is lead negotiator on the Transportation Climate Initiative, a multi-state cap and trade deal —  focused his remarks on changes to the transportation and home energy sectors, which account for 45 and 28 percent of carbon emissions, respectively.

“We know fundamentally that our economy across the globe is going to transition to reduce our fossil fuel use and look to other sources of energy and simply different ways of thinking about things,” he said.

As an example, he said the state’s electric car incentives should focus on opening up the market to middle-class buyers. At present, the least expensive high-tech electric car models, such as the 2019 Nissan Leaf, start at around $30,000. The $7,500 tax credit offered to consumers to meet the high price point is uncertain, however,

According to a recent article in Consumer Reports, the latest signals from the Trump administration indicate the credit may “go away sooner than anyone in the auto industry had anticipated.”

At the state level, Vermont’s governor has included $1.5 million in EV purchase incentives. He also has a proposal to use some of the $18 million from the Volkswagen settlement to pay for more EV charging stations.

The vehicles carry certain risks for Vermonters, however. In particular, electric vehicles don’t perform well in cold and snowy climates like Vermont, and no automaker has produced a four-wheel drive EV model.

“We have lots of tradespeople who need more heavy-duty vehicles,” Walke said. “There’s more to be done to make sure every price point and need is met.”

Other aspects of the decarbonization study discussed with committee members were carbon taxes and cap-and-trade schemes.

He added that a cost to carbon tends not to be enough to change people’s energy and transportation habits.

Rep. Mark Higley, R-Lowell, suggested all these programs together could prove overwhelming.

“My concern is, looking at this from an overall perspective, how do you envision making sure that this is looked at in its totality rather than piece by piece? It could be devastating to the economy,” he said.

Walke replied that for any of these programs to work politically, they must not devastate the economy.

“This only works if it works within our economic construct, because we fundamentally are not going to make the changes that we need to in a way that kills the economy. Nobody is gonna stand for that — you will all lose your seats. So there has to be the balance in place to be able to make these things happen.”

Cota started his testimony by acknowledging that the 2011 Vermont Comprehensive Energy Plan seeks to “virtually eliminate” the use of petroleum. He said the workers he represents as leader of the Vermont Fuel Dealers Association are adamantly against that aim, but he also sees opportunities for the industry to diversify.

He reminded lawmakers that conventional fuels still play an essential role. For example, EVs aren’t expected to pass 2 percent of market share even by 2025, meaning gasoline vehicles will continue to dominate Vermont roads.

He also told lawmakers that petroleum is what got all of New England through a memorable 15-day stretch of subzero temperatures in 2018, even as electric heat pumps froze and natural gas supplies dwindled.

He also disputed some of the key points from the decarbonization study, starting with the notion that raising the cost of carbon-based fuels is going to automatically reduce particulate matter emissions.

“What [would] happen if there’s a carbon tax that made fuel unaffordable? Some people would turn to wood, naturally. We’ve got 100 years of history here of when fuel prices go up … the wood stacks go higher.”

Cota said another mistake in the report is that sulfur dioxide emissions will significantly be reduced. He said the fuel industry has already adopted into low-sulfur mixes of their fuels, while the calculations in the study seemed to assume the higher-sulfur versions.