MONTPELIER — About 500 emergency personnel and officials from multiple levels of government are putting their emergency response protocols to the test this week in a massive drill designed to simulate a potential catastrophe.

The drill, which began Wednesday, will last through the end of Friday. State officials are encouraging Vermonters to be ready with their own disaster plans, especially regarding communication and evacuation.

The exercise will simulate the anticipated infrastructure breakdowns associated with an event similar to what happened after Hurricane Irene devastated roads and infrastructure in 2011. 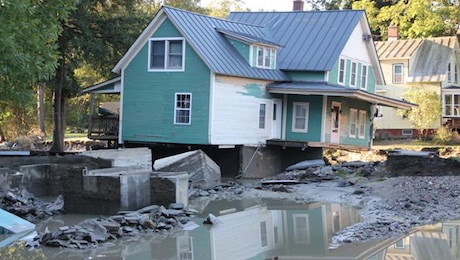 Hurricane Irene came through Bethel, Vermont, on August 28, 2011, and left a trail of damage to houses and other structures.

Mark Bosma, public information officer for Vermont Emergency Management, told True North that practice is the only way to learn how to prepare for real emergencies.

“We’re doing this to identify improvements and to identify what’s working well,” he said. “No matter what it will be a success because we will find out what we don’t know in an exercise, as opposed to [waiting for] an actual disaster.”

The scope of the drill will encompass 19 towns and cities, as well as 20 volunteer and state agencies. The drill is more focused on the aftermath stage rather than what happens during the event itself.

Gov. Phil Scott says such preparations are an ongoing process.

“We are constantly improving our response capabilities in order to ensure the safety of Vermonters during disasters,” he said. “Recovery is also vital for Vermonters. We have long planned for things like short- and long-term housing assistance, safeguarding against injury on damaged roads, health impacts of returning to a flooded home and other potential problems and this is our opportunity to put those into practice.”

On Wednesday, the first drills involved rescue crews searching for survivors amid simulated damaged structures. Both the short- and long-term needs of survivors were being assessed.

More than 130 Agency of Transportation personnel will participate in an updated command system intended for determining transportation infrastructure damage from four regional command centers as well as headquarters. Aerial drones are going to be an integral part of these assessments; live video streaming will keep responders updated on where all the worst damage occurs.

Bosma said having the roads broken down after a disaster is one of the key obstacles.

“It does impact both the travel of people trying to get to the store, or just leave their homes or get back home,” he said. “Also, for power utility crews that are trying to fix the damage, it has been an issue with past disasters. That is something that we’ve updated plans for.”

Another challenge during disasters is the potential loss of cell service in Vermont. Rescue crews have alternative options, but that’s not always the case for individuals.

He added that individuals should do whatever is necessary to ensure that they can communicate during a disaster, and plan for that. He also encourages residents to have evacuation routes thought out.

There will even be a simulated “multi-agency recovery center” used as a base for taking care of survivors.

“It is a place where survivors of a disaster can go to fill out paperwork if they are looking for federal assistance, finding out where shelters are, and signing up for short-term and long-term housing. And all the help that they will need will be in that one location,” Bosma said.

The Vermont State Emergency Operations Center, a handful of other department operations centers, other state agencies, and non-profit organizations are taking part in this week’s drill.

“We have learned valuable lessons from the recovery of Tropical Storm Irene and the 11 declared disasters since that time,” she said. “We continue to incorporate those lessons into our plans and are looking forward to implementing them during CAT 4. Vermonters will benefit from better coordination that results from practicing the most complex phase of disasters.”

Bosma said there have been 11 national disasters declared since Hurricane Irene, so there are a great variety of scenarios to be ready for. “We’re constantly updating our procedures and training to better reflect recovery operations,” he said.

This exercise is the result of two years of planning. All Vermont municipalities were invited to take part. When it is all concluded, there will be a report on what areas need to be improved so the state can be ready for the real thing.