By Tara Ross | The Daily Signal

Electoral College foes have been trying to get their way in Nevada for a decade. Have they finally succeeded?

The governor’s signature will add Nevada to a growing movement to ditch the Electoral College. Worse, Maine and Oregon could be close behind: National Popular Vote’s plan has already been approved by both states’ senates.

After years of stagnating, National Popular Vote has obtained support from four states in just one short year — or five states, if you count Nevada. 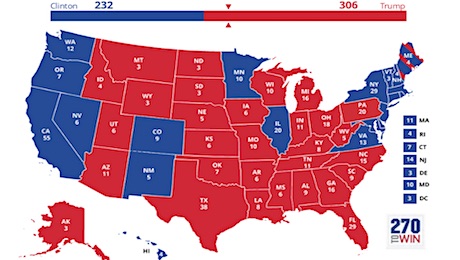 Straightforward change has proven difficult, so they resort to dishonest tricks: In Minnesota, National Popular Vote’s compact was hidden in an elections omnibus bill. That didn’t work, so it was hidden, again, in an appropriations bill.

In many states, committee hearings are scheduled at the last minute, making it difficult for Electoral College defenders to testify. In Maine, National Popular Vote supporters resurrected a bill, despite the “ought not to pass” vote it earned in a legislative committee. Other state legislators and journalists have been invited to junkets in Hawaii, Aruba, or Key West, Florida.

Somehow, Electoral College defenders are never invited to these “educational” sessions. In fact, the fight over America’s presidential election process is beginning to more closely resemble kindergartners bickering on a playground—and the process has about as much integrity.

“That’s not faaaaiiir! I don’t like those rules. I’m better than you. I’m taking my ball and going home.”

Even the structure of the National Popular Vote legislation is dishonest.

The Constitution provides that America’s state-by-state presidential election system cannot be changed without the consent of three-quarters of the states (38).

Nevertheless, National Popular Vote seeks an end run around this process. It wants states to sign a simple interstate compact instead.

By the terms of that agreement, states agree to give their presidential electors to the winner of the national popular vote, regardless of the outcome within a state’s borders. The compact goes into effect when states holding 270 electors (enough to win the presidency) have signed on.

To date, 14 states plus the District of Columbia have agreed to the compact’s terms. Taken together, these states hold 189 electors. Nevada adds six more, bringing the total to 195—just 75 electors short of 270. If Maine (four electors) and Oregon (seven electors) join the cause in the next few weeks, National Popular Vote will be only 64 electors short of its goal.

National Popular Vote must be laughing all the way to the bank. It relies on the state-based aspects of the system when convenient, but then switches to reliance on a national tally when that’s convenient.

Consider what is happening on another front: California legislators are working to prevent President Donald Trump from appearing on their state ballot in 2020.

Assuming Trump is the Republican nominee, how could he possibly win the national popular vote when he will be unable to win even a single vote from the largest state in the Union? With the National Popular Vote Compact in effect, the election will be over before it begins.

California is entitled to omit candidates from its own ballot in America’s state-by-state election process. Indeed, many presidential candidates have been omitted from state ballots in the past, including Abraham Lincoln, Harry S. Truman, and Grover Cleveland. But it’s dishonest, at best, to seize the rights of state sovereignty for one purpose but then to pretend that a national tally can work for another.

Don’t worry. Red states such as Texas are likely to omit the Democratic candidate from their own ballots in self-defense.

And so the race to the bottom begins.

Everything I need to know, I learned in kindergarten. One important rule? You don’t change the rules of the game just because you lost. Instead, you work on your weaknesses, improving so you can win next time.