An education organization claims there are more than 300 examples of liberal bias — from a partial presentation of abortion to critique of former President Ronald Reagan — in a well-known Advanced Placement (AP) history textbook.

The Education & Research Institute (E&RI) found errors and examples of liberal bias in the latter half of “The American Pageant,” a book that has in its entirety more than 1,000 pages. While this is a popular AP textbook, there are others used depending on a school’s preference. 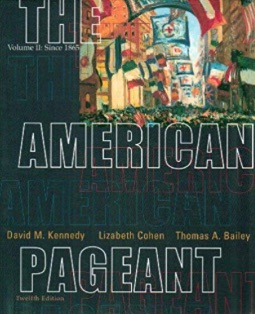 “We have 300, 400 pages of them,” E&RI president and former Reagan administration member Dan Oliver told The Daily Caller News Foundation in a phone interview. “Every page has a problem.”

There are 38 AP courses available to students in seven subject categories. They allow students to take college-level courses while in high school, according to the College Board. Students can earn college credit if they get an acceptable score as decided by the corresponding college the student attends.

While College Board, which oversees the AP exams, does not require particular textbooks, it can suggest them, but it is up to the teacher to choose a textbook. Teachers submit a syllabus to College Board to approve based on a framework, but it does not require any specific textbooks. It is unclear if the organization recommended “The American Pageant” or if it has become popular due to educators’ preference.

“We don’t have the numbers yet for the 2018 administration but in 2017, 505,302 students took the AP US History exam,” Director for Media Relations at the College Board Maria Eugenia Alcón-Heraux told TheDCNF in a statement.

Burt Folsom, an economic historian, wrote the online critique of the textbook. Folsom was a history professor at Hillsdale College from 2003 to 2017 and is now a professor emeritus.

“As a strongly biased textbook, it has distorted American history for three generations of students,” Folsom wrote on E&RI’s website, critiquing the book’s 12th edition.

The online critique highlighted the phrases that were considered either biased, misleading or incorrect and then explained why the passages contained errors. One of the examples cited Reagan as “no intellectual.”

“Though Reagan was no intellectual, he drew on the ideas of a small but influential group of thinkers known as ‘neoconservatives,’” the textbook reads.

“The textbook repeatedly belittles Reagan in this chapter,” Folsom wrote. “He was ‘no intellectual’ and he listened to neoconservatives. What about FDR? He had a ‘C’ average in college, but the textbook treats him as the wisest of men. Reagan was very successful as president, and perhaps the authors are jealous of his success.”

Another example Folsom points out is that progressives supported a law that would end alcohol sales, and it was not just “crusading churches.”

“One of the last peculiar spasms of the progressive reform movement was prohibition, loudly supported by crusading churches and by many women,” the book states.

The textbook also chooses to present the point of view of a woman who wants an abortion over the right of a child’s life in regard to the 1973 Supreme Court case Roe v. Wade, according to Folsom.

“I do not emphasize minor errors, which understandably creep into most histories,” Folsom wrote on E&RI’s website. “My focus is on the flawed ideas in The American Pageant that mislead students into thinking that the United States is fundamentally corrupt, and that the world is often worse off because America exists and has so much global influence.”

Oliver is responsible for the The American History Book Project, which aims to point out weaknesses in four U.S. history textbooks.

“What they learn is that the government is great, but the private sector is greedy and selfish,” Oliver told TheDCNF about the problem of liberal bias in history textbooks.

Oliver added that the critique for “The American Pageant” might apply for other history textbooks.

“I think the general gist of it would probably apply to many American history textbooks out there,” Oliver said.

E&RI was founded in 1974 and focuses on public policy issues.

The American Pageant’s most recent publisher Cengage did not immediately respond to TheDCNF’s request for comment. Cohen was on a planned sabbatical for the 2018-2019 academic year, according to Harvard.