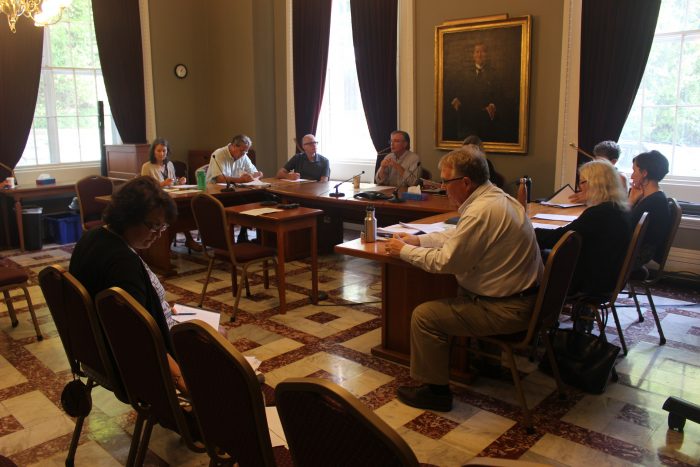 INDIE OR PUBLIC?: The Approved Independent Schools Study Committee met Monday afternoon to discuss what independent schools should be required to do to serve special education students.

MONTPELIER, Vt. — The Approved Independent Schools Study Committee met Monday at the Statehouse to determine if independent schools, which sometimes take public money from tuitioning students, should be held to the same requirements as public schools with regard to special education needs.

“Independent schools do not have to accept public dollars. The question I think before everybody is what requirements or expectations come along with taking in public dollars,” said Nicole Mace, a member of the committee and the executive director of the Vermont School Boards Association.

The committee, headed by Sen. Philip Baruth, D-Chittenden, is tasked with figuring out how 13 different disability categories could be covered by private schools. Currently, public school districts have to cover all 13.

Such may not be possible for private schools.

“I think what approved independent schools are saying is that it isn’t feasible, and therefore a number of them, such as the smaller ones as described by Seth (Seth Bongartz, chairman of the Vermont Independent Schools Association), would go out of business if they had to do that,” Baruth said. “But also a certain number of categories, four or five, covers most of the range.”

Early in the meeting, the case was argued that independent schools should do more. Jeffrey Francis, executive director of the Vermont Superintendents Association, read an excerpt from a story from the Vermont Bar Journal:

It does not appear that an education system that denies students with disabilities the opportunity to attend their taxpayer funded community independent school can withstand scrutiny under Vermont law. In its polestar decision in Brigham v. State, the Vermont Supreme Court, citing Brown v. Board of Education, held that a ‘system (that) has fallen short on providing every school-age child in Vermont an equal education opportunity’ violates the Education and Common Benefits Clauses of the Vermont Constitution.

The opinion suggests that all schools receiving public dollars may have to find ways to serve students with special needs.

In 2014, Act 153 transferred all special education operations from the school district level to the supervisory union level. The idea tossed around was that special education personnel and resources could be distributed among private schools under this existing system.

“The idea was a sort of regional approach to special education,” Mill Moore, executive director of the Vermont Independent Schools Association, told True North after the meeting. “So instead of focusing on providing services in a specific school, one school might have a particular set of talent and expertise and another might deal with a different set of disabilities, and so forth.”

“The idea is that if a really small school is confronted with a really difficult disability, it may not be able to deal with it properly. So, if they can share resources on a regional basis, we can improve services.”

Moore said Monday’s meeting did not result in an agreement but provided “the beginnings of some ideas that we can touch on that work in common.”

Mace said capacity would be an important factor in determining the responsibility of independent schools.

“How many publicly funded students can you enroll this year? If the demand exceeds the capacity, there’s a lottery system. If through that lottery process a child with a disability is enrolled, then the IEP (Improvised Education Plan) team meets with the independent school,” she said.

She added that standards for private schools should be realistic: “We recognize that it’s not feasible to ask all independent schools accepting publicly funded students to become qualified and approved in all 13 categories of disability.”

Bongartz said any “discrimination” by private schools is out of place. “The constant language about discrimination and treating kids unfairly is purely alien to me,” he said.

The committee also discussed the transparency of private school budgets, suggesting that more disclosure is a good thing.

“What it means,” Moore said, “is that the independent schools are not going to unexpectedly go out of business and leave a bunch of kids suddenly in need of going back to their public schools.

“It means that the state has the capability to look at independent schools’ finances to see that they are capable of staying in business.”

The meeting was the third of seven scheduled to discuss independent schools. The next meeting will be held in September.