MONTPELIER, Vt. — High education costs, pre-K administration and marijuana legalization were priority issues for lawmakers in their first week back at the Statehouse for the 2018 legislative session.

On Thursday, the House passed H.511, which if signed by the governor, will eliminate all penalties for personal possession of up to an ounce of marijuana and cultivation of two mature marijuana plants.

At the end of the 2017 legislative session, Gov. Phil Scott vetoed a similar bill, S.22, and the House Republicans blocked an attempt for a veto override vote. At the time Scott said he was still open to legalization, but only if safety measures such as education and roadway provisions were adequately addressed.

During debate on the House floor Thursday, Republican lawmakers, along with Democrat Rep. Cynthia Browning of Arlington, offered no fewer than seven amendments to add public safety features that would ensure highway safety, shield kids from marijuana use of adults, limit the amount of pot that may be stored to 2 pounds, and fund youth anti-smoking drug education, among other things. Democrats and Progressives voted down each attempt to improve public safety by roughly a 6-4 margin.

Road safety continues to be a key concern, as some representatives worry that the current drug recognition experts tasked with identifying drugged driving may not be adequate to identify stoned drivers.

“The press is reporting that there have not been any convictions based off of a DRE,” Rep. Brian Savage, R-Swanton, said to colleagues in a Republican caucus.

Browning called for a provision that requires a tangible highway sobriety test comparable to an alcohol test.

“We have had an increase in the number of law enforcement who are trained as drug recognition experts and that’s all to the good,” she said. “But we don’t have a field test impairment device for cannabis intoxication and impairment the way we do with alcohol. We need that and we don’t have it. … You are not protecting the safety of the traveling public.”

Rep. Francis McFaun, R-Barre Town, got upset that Gov. Scott might approve legislation which lacks key components he asked for back in May. “He said he would never support a bill unless these [education and roadway safety] were in there,” he said. 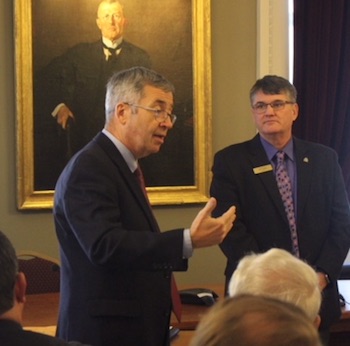 Republicans, including Rep. Peter Fagan, left, and Minority Leader Don Turner, right, meet in caucus session to lay out strategies for marijuana, education and other issues.

Another big topic this past week was education spending. The state is facing a 9-cent rise in property taxes due to an education fund shortfall of around $80 million. Rep. Scott Beck, R-St. Johnsbury, pointed out that 6 cents of that 9 cents is owed to increases by school board spending.

“Every year we are passing more and more mandates and other things on top of our school districts, including now,” she said. “And this isn’t us — the state Agency [of Education] and the State Board [of Education] have got this ‘proficiency-based learning’ that is changing everything. It’s literally a 180-degree shift in their grading and in everything else that they are doing.”

Beck said education spending by individual districts is spread around in a way that individual communities do not feel the full weight of the decisions they make.

Also last week, members of the Education and Human Services committees in both chambers met to discuss proposed changes to Act 166, which provides 10 hours of preschool education to qualified families. 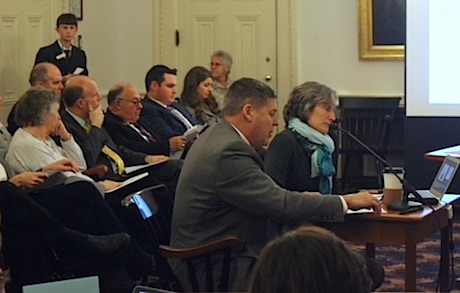 “Having dual agencies try to run one program was not working. It’s just too much to expect,” Gobeille said.

Regarding operational functions and policy, Gobeille called for more uniformity.

“At the end of the day, it’s so confusing for the people who are trying to give us feedback,” he said. “The way this bureaucracy is run people might get frustrated to some degree, but it should not be frustrating to this level.”