While Vermont remains in a state of emergency with burdensome restrictions on businesses, the reopening and subsequent recovery across the Connecticut River are moving along at a more aggressive pace.

“The feel on the streets is much different now than it was just two or three weeks ago,” Timothy Sink, president of the Greater Concord Chamber of Commerce, told True North. “If you drive down Main Street in Concord, N.H., it just feels vibrant. There’s a lot of activity, there’s a lot of outdoor dining, there’s a lot of pedestrian traffic, and it’s starting to feel back to normal.”

New Hampshire, like other states, is still watching the progression of the pandemic closely as it makes each adjustment. On Wednesday, Gov. Chris Sununu said his state would prefer to limit hours for restaurant dining and bars rather than shut them down, should COVID-19 cases surge.

“We’ve been moving forward at somewhat of a careful pace over the last month or so, opening up segments of the economy one piece at a time,” Sink said. “The numbers have been improving over the last several weeks in terms of where we stand with the pandemic. It’s emboldened the powers that be to accelerate the reopening of the economy, so each week we see a new section open up, with more restrictions being relaxed.” 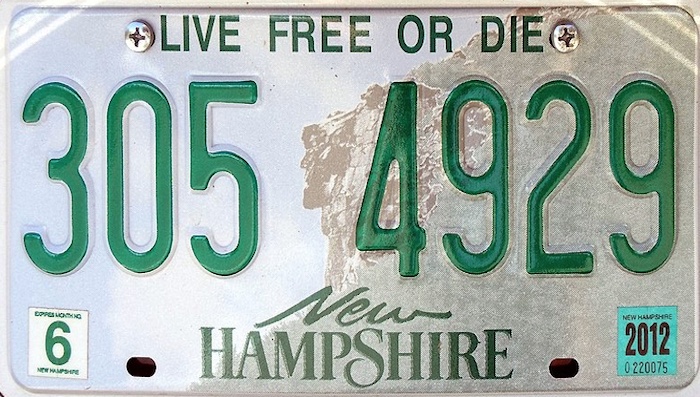 LIVING UP TO ITS MOTO – In “live free or die” New Hampshire, residents are choosing to live and be free in the wake of the underwhelming COVID-19 outbreaks.

New Hampshire is not taking a one-size-fits-all approach for restrictions. For example in the northern portion of the state where COVID-19 cases are sparse, restaurants are allowed to open to 100 percent capacity. In the southern portion where there are neighboring states with more infections, restaurants are only allowed to open to 50 percent capacity.

“It has to do with the number of cases and what the particular geography looks like,” he said.

In comparison, as of June 26, restaurants, entertainment venues and hospitality businesses in Vermont can have 75 people, or up to 50 percent of the space’s allowable capacity — whichever is less.

More than half of all the cases in Vermont are in Chittenden County, and all but three counties have fewer than 100 cases per 100,000 people. Still, Gov. Phil Scott treats all counties the same.

On the state of layoffs, Sink said unemployment benefits have been beneficial enough that some workers are reluctant to get back to work until the payments end.

“For restaurants and retail, if you can earn more than $600 a week just doing nothing and maybe earn a little less than that for a part-time retail job. That’s not a great incentive to go back to work,” he said.

According to the New Hampshire Department of Health, the death toll for the Coronavirus is 375. The state expected to have many more COVID-19 deaths, but it never happened.

“We were prepared for the worst,” Sink said. “We had established all kinds of surge sites assuming that hospitals became overwhelmed. None of those surge sites opened up, they’ve been dismantled now.”

Hampton Area Chamber of Commerce President John Nyhan, a member of the governor’s 19-member task force for reopening, said even though the virus wasn’t as bad as many had feared, it was still better to be safe.

“We are experiencing a virus that we knew very little about, and I think the governor made the right decision to be on the safe side, to see how all of this played out,” he said.

Nyhan said if there is a second wave of the virus, things should go smoother now that they’ve learned more about it.

On Twitter, some Vermonters are upset that neighboring states are opening up.

a friend of mine who runs a seasonal business told me that out-of-state visitors make no bones about the fact that they don't care about COVID restrictions and aren't concerned about contagion in VT. between them and VTers generally not wearing masks, we're in trouble. #vtpoli https://t.co/pPHu3D5iZu

7 thoughts on “Economy reopening and recovering faster in New Hampshire”