According to the Huffington Post, “no family would have to spend more than 7 percent of its household income on child care, no matter the number of kids.” Providers would have to meet safety and curriculum standards, and the proposal would be financed through a “tax on wealth.”

But the fact is that a new large-scale federal subsidy day care is unlikely to improve educational outcomes for children. It will cost billions – according to one estimate $700 billion over ten years for the Warren plan – and furthermore, it may not reflect the preferences of families when it comes to their children’s care in their formative years. 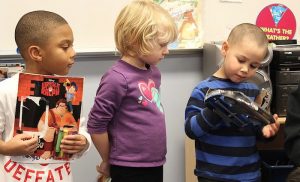 According to the 2012 Head Start Impact Study, early childhood education has no impact on the cognitive outcomes of children.

Although the Warren plan talks about day care subsidies rather than “preschool” subsidies, the reference to “curriculum standards” suggests the effort will be about more than child care for parents.

Well, Head Start is far from a success story when it comes to participant outcomes.

The Department of Health and Human Services released the scientifically rigorous Head Start Impact Study in 2012, which tracked 5,000 three- and four-year-old children through the end of third grade. The results? Head Start had little to no impact on the parenting practices or the cognitive, social-emotional, and health outcomes of participants. Notably, on a few measures, access to Head Start had harmful effects on participating children.

Taxpayers have spent nearly $200 billion on Head Start since its inception in 1965. Yet, as the federal evaluation found, by the time the children finished third grade, there was no difference between those who attended Head Start and the control group of their peers who did not.

At the state level, proponents of government funded early education and care programs have long held up Tennessee’s Voluntary Pre-K program as a model state-based preschool program. They note the fact that the child-adult ratio is limited to 10:1, teachers must be licensed, and a structured “age-appropriate” curriculum must be used in classrooms.

But a randomized control trial evaluation conducted by researchers at Vanderbilt University reported no significant differences between the control group and the preschool group on any achievement measures by the end of kindergarten.

But there are significant issues with these two examples.

First, no study has replicated the findings of these two.

Second, these programs had small sample sizes (just 58 children were in the experiment group in Perry project), and the programs were comprehensive, boutique programs that included social and nutritional programs and parent counseling. These two half-century old programs look quite different from current programs and proposals. Russ Whitehurst of the Brookings Institution sums up looking to the Perry Preschool Project as instructive today this way, noting that the findings:

demonstrate the likely return on investment of widely deployed state pre-K programs for four-year-olds in the 21st century to about the same degree that the svelte TV spokesperson providing a testimonial for Weight Watchers demonstrates the expected impact of joining a diet plan.

In addition to the lack of educational impacts and the cost to taxpayers, it’s also unclear whether parents want this federal “solution.”

Already, low-income families have access to the federal Head Start program for childcare – a program which should be reformed, at the very least, to allow participants to attend a private provider of choice.

At the same time, an expansion of federal early education and care is more likely to create new problems of its own, rather than address these deeper social issues, such as the crisis of unwed parenting.

Finally, as my former Heritage Foundation colleague Salim Furth and I explained in a 2016 paper, additional federal subsidies for early childhood education introduce a large distortion into the market and must be funded by higher tax rates.

Ultimately, a universal early education and care program is unlikely to boost educational outcomes, may not reflect the preferences of families, and will cost taxpayers billions over time. This is the wrong way to help America’s kids.