According to the Vermont Department of Public Service, the price of heating oil has risen 25.1% between February and March. Many Vermonters are burning wood to supplement their heating because wood is cheaper. The heating season is almost over, so customers will be able to escape the worst effects of the price spike. However, if the high prices continue into the next season, they will be affected. 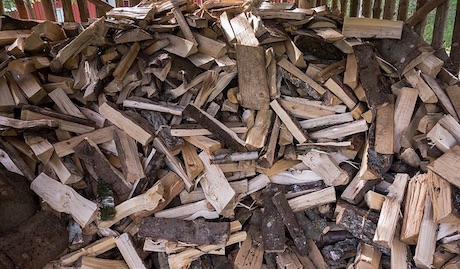 “We’ve had more calls this time of year this year than we did last year for firewood because of the cost of fuel being so high,” said Brittnee Dwyer earlier this month. Dwyer is one of the owners of Tony Dwyer Logging and Firewood, LLC, which is located outside of St. Johnsbury.

Other types of heating fuel are rising in price, too. “Fuel prices in general in the past month have gone up about 20%,” said Matt Cota, the Executive Director of the Vermont Fuel Dealers Association.

He remembered an “old Vermont witticism” about how to tell how high the heating oil prices are. “You can tell just by driving around and looking at how high are the wood stacks.”

Firewood and wood pellet sellers are seeing a higher demand. “We’ve had more calls this time of year this year than we did last year for firewood because of the cost of fuel being so high,” said Brittnee Dwyer earlier this month. Dwyer is one of the owners of Tony Dwyer Logging and Firewood, LLC, which is located outside of St. Johnsbury.

“People with multiple sources of heat are leaning more towards their pellets. There’s more stability in that pricing, that’s not being affected by world events,” said Peggy Clay, a customer service representative at Bourne’s Energy. Bourne’s Energy sells various types of heating fuel from several locations in northern Vermont. “We’re definitely encouraging people to look at pellets as more of primary versus secondary for those that have multiple sources,” she added.

The heating season is almost over, so Vermonters will not be impacted by high heating prices for much longer. Some Vermonters have even been able to avoid the rising costs entirely because they bought their winter fuel in the previous summer. These people “aren’t really experiencing these rising heating costs because they prepaid for their fuel,” said Matt Cota.

High oil prices bring economic pain for oil sellers, too, not just customers. “The average retail Fuel Company in Vermont has just 12 employees. The name on the side of the truck is usually the person driving the truck. These are very small companies that don’t have access to cash reserves,” said Matt Cota. He explained that when prices are high, customers take longer to pay the oil companies for oil they have delivered. Since the small companies do not have access to cash reserves, they depend on revenue flowing in to repay loans that they took out to buy oil wholesale.