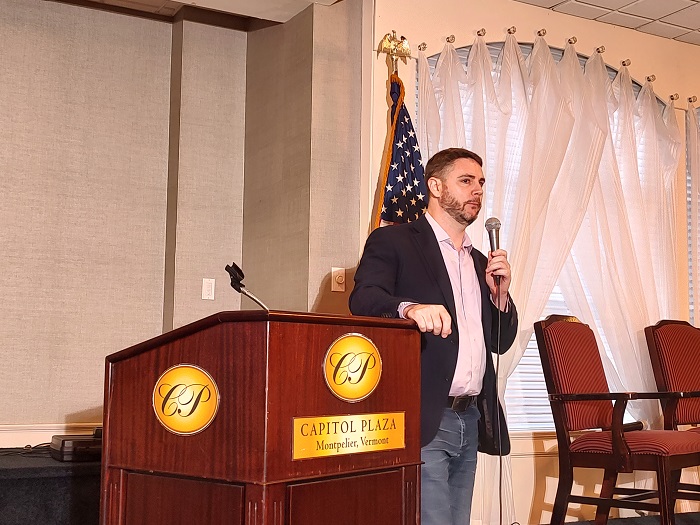 MONTPELIER — At a speaking event Friday organized by VT Grassroots, Dr. James Lindsay told an audience gathered at Capitol Plaza that Marxism is having a dangerous influence on American culture and institutions.

“[The ideology] says that you have to radicalize the students, to teach the students and then the colleges and the universities to be radicals,” Lindsay said. “And they get them to teach the theory to these radical organizations that are rising up within those populations.”

Lindsay was selected because of his success as an author and internationally recognized speaker who offers relentless criticism of woke ideology. His book, “Race Marxism: The Truth About Critical Race Theory and Praxis,” has been a bestseller on Amazon since its release in February.

Lindsay suggested that racism is always going to be assumed whenever different groups of people see different outcomes.

“Any time racial inequity surfaces, the explanation will be discrimination,” he said. “In other words we are going to have a ministry of truth — which they are actually creating now separately — that says that the answer to racial difference and outcomes is always discrimination.”

He said Marxists coined the phrase “identity politics” in 1977 and has been used ever since to control vulnerable populations.

During the evening event, Lindsay presented a special ‘Hero With Valor Under Fire’ award to Liz Cady, a former member of the Essex Westford School District board who routinely spoke out against critical race theory and its commonly-seen cloak of “diversity, equity and inclusion.”

Also on hand for the event was Nick Meriwether, a philosophy professor at Shawnee State University in Ohio. Meriwether made national headlines for refusing to use the preferred pronouns of a student — an act that was penalized by the university. The U.S. Court of Appeals for the 6th Circuit ruled that the school was violating his First Amendment rights.

“The Sixth Circuit ruled that equating reluctance to employ gender identity affirming pronouns with sexism or racism is discriminatory,” he said.

Meriwether said addressing people by a preferred gender rather than their biological one contributes to an ideology that is contrary to free speech.

“You are in fact affirming gender identity ideology, you are not getting around it,” he said.

And, quoting from an email he sent to a fellow faculty member, Meriwether said, “I agree that a state university faculty member should have the freedom to recognize transgenderism. I’m simply exercising the same right.”