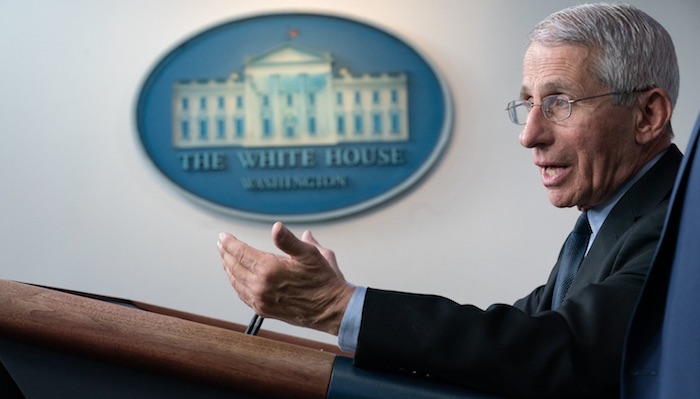 VERMONTERS ARE FOLLOWING ORDERS: Dr. Anthony Fauci, director of the National Institute of Allergy and Infectious Diseases, says that Vermonters are doing well not to challenge the authorities who have largely shut down the economy and removed freedoms for months.

According to Dr. Anthony Fauci, director of the National Institute of Allergy and Infectious Diseases since 1984, Vermonters are doing a good job of following the lockdown measures put in place around much of the nation in response to COVID-19.

He also insists that Vermonters would do best to continue keeping their economy and freedoms restricted, and he praised them for being diligent with wearing masks.

“If the citizens of a particular state or a city or county are really in lockstep with the authority that does it, it is not a big problem as you’ve seen with the success in Vermont,” Fauci said in a press conference Tuesday with Gov. Phil Scott.

Earlier this month the Centers for Disease Control and Prevention reported that of the nearly 200,000 U.S. deaths attributed to COVID-19, just 6 percent were due to the coronavirus alone. About 94 percent of those who died had more than two comorbidities, such as diabetes, flu, pneumonia, heart disease and other infections. Also, the vast majority of COVID-19 deaths are elderly people in nursing homes.

Coronavirus-related restrictions imposed by Vermont’s governor have cost the state hundreds of millions in anticipated tax revenue and have cost the workforce more than 80,000 jobs.

Fauci noted that in other parts of the nation people are pushing back against health mandates.

“In some areas, anything that smacks of an authoritative statement to the citizenry often is met with a considerable amount of pushback,” Fauci said. “… A national mandate probably would not work.”

Fauci is asked if Vermont’s low level of COVID-19 cases should be attributed to the strong shutdown measures by Scott or to the state’s rural population. Fauci was adamant that Vermont only succeeded because its citizens follow orders.

“This is a success because of what you did and not only because of the low density in Vermont,” he said.  ” … The message that I would like all of the citizens of the state to hear is that this virus is a formidable foe. You give it an opportunity to reemerge its ugly head, whether you are in the beautiful rural area of Vermont or in the middle of Manhattan or the Bronx, that virus is going to take advantage of that.”

Fauci continued to emphasize that success with low deaths and cases does not mean society can open up again.

“Even when you are in as good shape as Vermont is, you got into good shape by certain things that you’ve done,” he said. “Don’t get careless, and I don’t expect that you will because there’s no indication of that.”

Not all rural states around the nation imposed strict COVID measures. South Dakota allowed local communities to make decisions on mask mandates and restrictions on business operations. The Mount Rushmore State did not see huge rises in cases, hospitalizations or deaths.

When asked about a potential COVID-19 vaccine, Fauci said six versions are being fast-tracked through the testing process. He says it will be aspirational to get a vaccine even if it doesn’t work for over a quarter of the people who get it.

“With a vaccine that has a reasonable degree of effectiveness — i.e. about 70 to 75 percent — I think if we get that by 2021, we are going to be in good shape,” he said. “That’s aspirational but I think we can do it.”

“Clearly the buzz around the country is confidence in the safety and efficacy and the scientific process regarding vaccines,” Levine said. “Can you help Vermonters understand the research and the process of vaccine development? And take them through this process at the federal level and tell them why they should trust the eventual vaccine that comes out of these trials.”

Fauci insists that safety is a priority.

“You have advisory committees to the FDA and the FDA’s pledge that they will not put a vaccine for approval unless it’s clearly shown to be safe and effective,” he said. “And the final thing you put on there is you have the scientific community like myself and Dr. Collins, who is the director of NIH [National Institutes of Health], who very carefully look at that and are not shy about giving their scientific opinion.”

The NIH does watch vaccine trials and is “very concerned” about one setback with a recent COVID-19 vaccine trial in Britain when a patient suffered spinal cord damage. According to Dr. Avindra Nath, who works for a division of the NIH, “the whole thing could get derailed” when there is a complication like this.

14 thoughts on “Dr. Fauci: Vermonters ‘in lockstep with authorities’ on COVID-19”