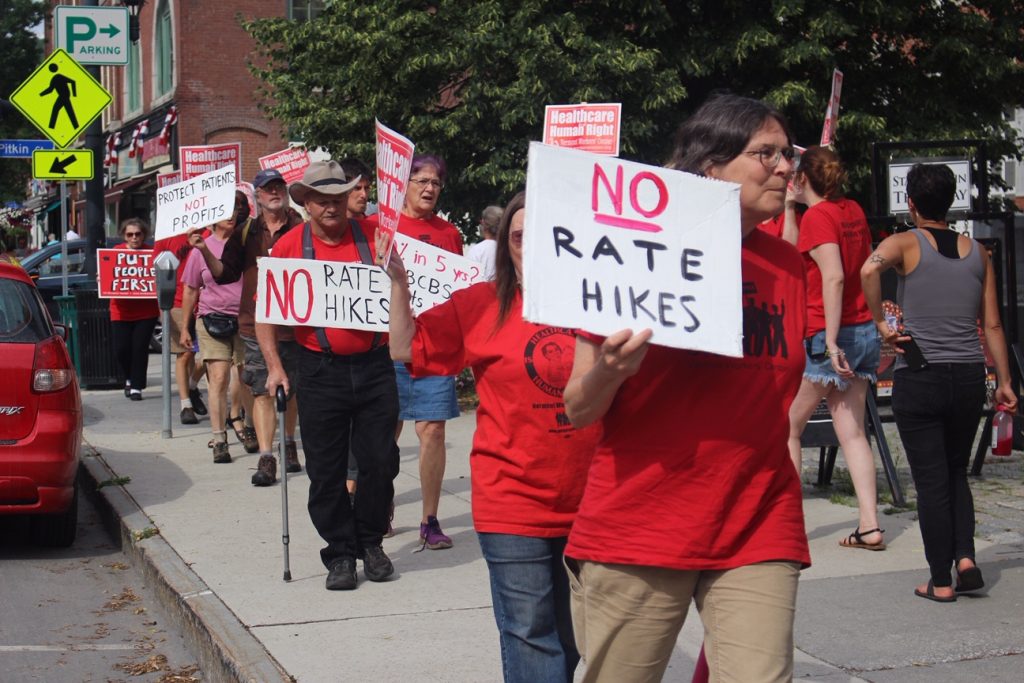 RATE HIKES AHEAD:  Members of the Vermont Workers Center march on City Hall in Montpelier, chanting for no more rate hikes to their insurance premiums.

MONTPELIER — Blue Cross and Blue Shield Vermont and MVP Health Care, who together share a monopoly on the health insurance industry in Vermont, are once again asking to raise health insurance rates on Vermonters.

This year, they are asking for 15.6 and 11 percent increases, respectively, over 2019 premiums offered on Vermont Health Connect.

Vermonters protested outside City Hall on Tuesday afternoon before going inside to plead their case for no hikes in a public hearing before the Green Mountain Care Board. Many of the protesters wore red and were from the Vermont Workers’ Center. Most called for universal health care plans and the Medicare for All plan championed by Vermont Sen. Bernie Sanders.

Inside at the hearing, Ethan Park, of Montpelier, took the podium and noted that last year Vermont went through some of the highest rate hikes in the nation.

“Not only was Vermont the highest but Vermont and North Dakota were by far the outliers. The other states were far below, including Tennessee that decreased a hefty 22.6 percent for 2018,” he said. 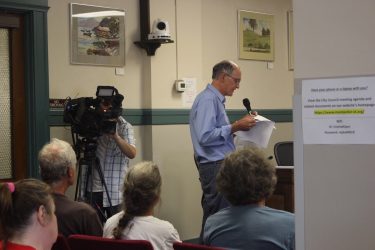 Speakers testify about the high cost of health insurance in a public hearing before the Green Mountain Care Board on Tuesday.

He cited a study by United Benefits Advisors, which found Vermont to have the fourth highest premiums in the nation for an individual for the year 2016.

“I am a 20-year-old, I have been chronically ill since I was 18, and I have an illness that displays itself in chronic pain, muscle weakness and nausea,” she said.

Walker said she’s seen multiple doctors and has had multiple scans and surgeries, but she eventually gave up because even with coverage from Blue Cross, treatments became unaffordable. She said she’s currently off insurance.

She explained that her whole situation has become like a catch-22.

“It’s reached the point where it’s a vicious cycle. I need certain treatments to go to work, and I need to work to afford those treatments,” she said.

Kevin Wagner, of Bradford, talked about how he’s afraid to seek treatment for hypertension because he’s grown weary of the high bills.

“I testified here last year and I’m probably still paying down medical debts that I incurred around that time,” he said.

Wagner, said every time he has to go to the doctor he stresses over costs.

“I’ve told this story before, and a lot of people here have stories just like it,” he said. “I have to admit to feeling very frustrated that we have to keep coming to tell these stories year after year, but the end result is the same.”

Rachel Nelson, of Barre, explained that she lost her baby just a week ago and she’s been haggling with her insurance company to help cover any of the ensuing bills for dealing with that. It was a third miscarriage in a year.

“They also don’t tell you that you will have to argue with your insurance company that you still deserve your medical care even though your baby died,” she said.

She noted that each time she lost a baby the doctor would say it was a fluke, and the insurance company refused to pay for any tests.

“We’re under Blue Cross Blue Shield of Vermont because they cover pregnancies and you don’t have to pay co-pays,” Nelson said. “There are certain fees along with the monthly amount that you have to pay unless your baby dies. Then it’s not pregnancy, it’s not prenatal care.”

Jim and Connie Pircher, of Barnet, were outside prior to the event. As they discussed some of their opinions with media, Jim Pircher questioned if a Medicaid for All system isn’t going to impose high costs on citizens just like the current system does.

“I want to know what progressive taxation means in their literature,” he said.

Connie Pircher, who was in red with the Vermont Workers Center, said she supports Vermont’s Act 48.

“Universal health care for all is available and should be for everyone,” she said. “But because there seems to be a lack of funding, it doesn’t really get supported. One of our goals is to make sure that Act 48 continues to be on the forefront.”

Those without health insurance can still get health care and pay as they use the services. Also, Vermont has a financial assistance program that covers certain emergency and urgent services.