A comment by state Rep. Annmarie Christensen saying she fears she might rip the heads off local Trump supporters has landed the Windsor-2 Democrat in trouble with her constituents. 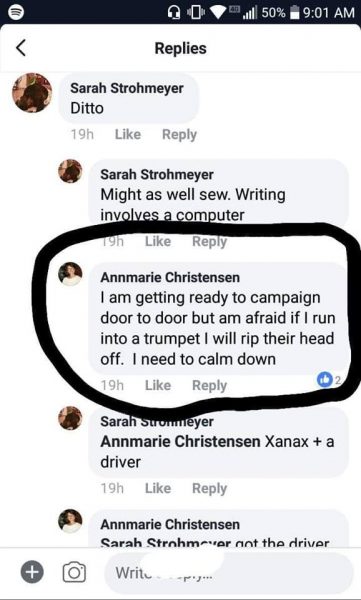 The remark, shared primarily between Christensen and Middlesex Town Clerk Sarah Strohmeyer, was visible to anyone on Facebook.

At one point Christensen posts, “I am getting ready to campaign door to door but am afraid if I run into a trumpet I will rip their head off. I need to calm down.”

In reply, Strohmeyer advises her to take panic disorder medication: “[Take a] Xanax + a driver.”

Since the exchange, other Facebook users have taken a screenshot of the threat against Trump supporters — “trumpets” — and reposted it on nearly every conversation thread on her Facebook page going back to at least Aug. 5.

A handful of users have responded to the state representative with their own angry comments.

Another had this to say: “I am registered to vote in Weathersfield, VT but will not vote for Christensen again!!!” Karen Bradley Lewis of Woodstock wrote.

Facebook user John Mott called out the media for giving her a free pass because of her politics: “Substitute the word ‘jew’, ‘black’, or ‘Muslim’ for ‘Trumpet’ and this violent loon would be vilified in the local and national press, and social media, but bigotry is OK if you are a leftist. How very KKK of you Annmarie Christensen.”

Christensen, a Perkinsville resident, represents the towns of Cavendish, which delivered 252 votes for Donald Trump, and Weathersfield, which had 647 votes for the president.

She did not immediately respond to a request for comment on Friday.

Strohmeyer, a Dutton-Penguin author of more than a dozen books, including the Bubbles Yablonsky mystery series, did not post any inflammatory remarks on Facebook. 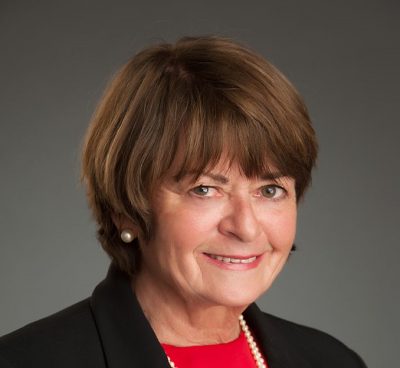 SOCIAL MEDIA RAGE: Democrat Rep. Annmarie Christensen is facing a backlash after she made threatening comments against Trump supporters on Facebook.

Nationally, other public figures have landed in trouble. In 2016, Seattle Mariners catcher Steve Clevenger got in trouble for tweeting that Black Lives Matter is “pathetic” and that supporters all should be “locked behind bars like animals!”

Clevenger was suspended for the remainder of the season without pay.

The incident prompted sports editor Ryan Kuhn to write a commentary titled “Public figures should watch what they post on social media” for the Daily Record in Washington.

More recently, entertainer Roseanne Barr lost her spot on the revival of her hit comedy show “Roseanne” when she tweeted “Muslim brotherhood & planet of the apes had a baby” in reference to Valerie Jarrett, a former adviser to President Barack Obama.

The enormous financial implications of that single tweet were not lost on one commentator. The show had made ABC Studios $45 million in advertising revenue for the year before it got shut down during the summer.

It remains to be seen how the comment will affect Christensen’s political career. She is currently running unopposed for re-election in the Windsor-2 district. She has not posted anything new on her page since Sept. 28.