Editor’s note: This story was reported before the Richmond Selectboard’s Nov. 7 meeting, at which this topic was slated to be discussed, and updated briefly after the fact.

RICHMOND — Nearly 430 acres of town forestland here remains closed to the public almost five years after a local family sold the property for people to enjoy. And a spat between selectboard members and the committee responsible for the land brought the Andrews Community Forest’s sluggish management to the forefront last month.

The board Oct. 17 declined to approve a $3,500 request from the Andrews Town Forest Committee to pay for a trail plan study the committee had contracted and completed without approval. Officials then approved it Nov. 7 after some discussion, said Duncan Wardwell, assistant to the town manager 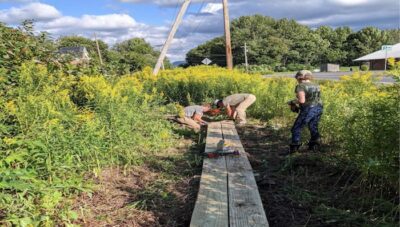 Nearly 430 acres of town forestland here remains closed to the public almost five years after a local family sold the property for people to enjoy.

That refusal, then approval, was the result of two contentious October meetings in which selectboard members criticized the committee for not getting approval to pay for the study before having it done — and spurred residents to critique the selectboard’s lax approach to opening trails at the forest.

“I do not know how we incur expenditures without prior approval,” selectboard member Bard Hill said at the board’s Oct. 3 meeting.

Added board chair June Heston: “The work has been done, and someone will expect payment. It isn’t the right way to go about it.”

At the Oct. 17 meeting, discussion ended without a motion to approve the expense. Board members told the forest committee to bring back the funding request and then an amended contract before they’d greenlight any payments.

“It’s only fair,” Hill said at that second meeting.

The request was to cover a review by ecological consultants from Arrowwood Environmental for the trail plan in Andrews Town Forest. The local Andrews family sold the land to the town in April 2018 so that the 428-acre parcel could be protected and used for outdoor recreation.

The forest committee decided to contract for the review without approval because approaching colder conditions would have interfered with the study, committee leaders said. Then committee leadership went to the Richmond Conservation Committee — the bureaucratic middlemen between the board and forest commission — to ask the town to pay for it. To complicate things, at least one forest committee member, Melissa Wolaver, said she wasn’t aware the work had been done before approval.

But other officials have defended the forest committee, asking whether the procedural breach of custom really mattered.

“I am glad they did the work ahead of time as we just had a frost … We agreed this was acceptable to us,” Judy Rosovsky, chair of the conservation committee, said at the Oct. 3 meeting.

Selectboard member Jeff Forward didn’t seem to think the plan was urgent enough to bypass the process. “What is the harm in waiting?” he asked at the same meeting.

That question would stir another debate — this time online, outside the Richmond Town Center meeting room.

Resident and former forest committee member Tyler Merritt, like others, took to Front Porch Forum to voice his reaction to the Oct. 3 meeting

Merritt’s 680-word post responded to Forward’s comment with a list of concerns about the underdeveloped town forest. Residents would love the opportunity to hike through the forest, but after five years it still has no trails, he wrote. The parking lot is almost always barren, he wrote, and he hasn’t witnessed a single bus in the new bus area in the parking lot.

“The bottom line is, after 5 years of ownership, the pertinent question the Selectboard members should be asking isn’t WHAT’S THE URGENCY? It should more appropriately be WHAT’S THE DELAY!” he wrote.

Merritt’s post prompted replies from other residents — some echoing his concerns, others claiming the proposed trail system would hurt local wildlife in the public forestland.

“I think we’re all conservationists,” Merritt said in an interview afterward, addressing the worries about the trail plans. “What they seem to be for is an absolute position of making a ton of forest a protected wilderness designation and not allow townspeople recreational opportunities, and that was never the stated intent of the town forest when the townspeople voted.”

After the contentious first meeting and debate between residents, forest committee chair Jesse Crary defended the committee’s decision-making to the selectboard at the Oct. 17 meeting. He addressed some of the conservation-related concerns brought up online, too.

“This fine-scale review had to be done in late summer, early fall, because what they were doing is trying to identify certain plants and such within that trail corridor that could make it [so] we might have to redirect or we change the direction of trail,” Crary said.

Caitlyn Littlefield, the forest committee’s secretary, described the intensive process the planning has had to go through. “This has been one of the perhaps one of the most intensely pored over trail layout efforts in Vermont state history,” she said.

The forest committee meets Oct. 25 and plans on discussing the situation further. The next selectboard meeting is Nov. 7.

6 thoughts on “Delays on town forest draw debate in Richmond”