READSBORO — The controversial Deerfield Wind project that took over 10 years and $7.5 million to complete is now generating power, but regional data shows that renewables are not producing as much energy in these cold winter months as some might have hoped.

The 15-turbine industrial wind plant located in the towns of Searsburg and Readsboro will produce enough renewable energy to power approximately 14,000 Vermont homes annually, according to officials at Avangrid Renewables, the project’s developer. Green Mountain Power has a 25-year contract to purchase the harvested renewable energy from the 30-megawatt facility. 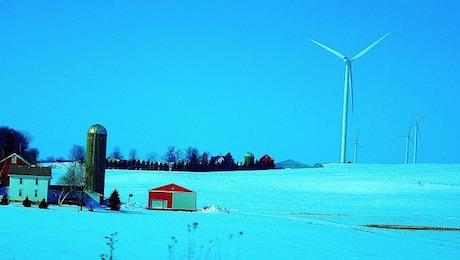 EFFICIENT? During winter months, wind turbines such as those pictured in this file photo face intermittent production threats from snow and ice.

Spokespersons at ISO New England chose not to comment on the efficiency of the Deerfield Wind project, but the nonprofit responsible for overseeing the region’s electric power grid provides daily live charts that show renewables aren’t producing much energy in the cold weather when demand is high.

As of Friday, oil topped the list of energy sources at 38 percent, with nuclear and natural gas coming in next at 23 percent and 15 percent, respectively. Renewable sources made up only 12 percent of the active fuel mix, with wind energy providing nearly half that amount.

Paul Copleman, communications manager at Avangrid, told True North he’s not convinced turbines are less efficient in the cold, and said wind farms in northern parts of the U.S. generally produce more energy in the winter due to increased wind.

He added that if the turbines don’t produce efficiently, it wouldn’t come out of Vermonters’ wallets.

“Seasonal production doesn’t cost Vermonters money,” Copleman said. “We own the project and bear the risk if we don’t produce, and Green Mountain Power has agreed to a fixed cost to buy the power for its customers.”

“In this period where we have this polar air that’s sitting on top of us, the winds tend to die way down and (the turbines) don’t operate that well under these conditions,” she said.

Linowes said the cost and terms of agreement shared between the two companies cause her to think Vermont ratepayers aren’t getting the best deal possible on energy.

“If the energy is very low, if it goes negative, who’s going to pick up the price? Deerfield is always going to get its 8.8 cents per kilowatt hour they (Green Mountain Power) are committed to paying,” Linowes said. “It’s a terrible contract. … I don’t think Vermonters realize how much they are paying for this energy.”

5 thoughts on “Deerfield Wind turbines up and operating, but renewables lagging in cold temps”