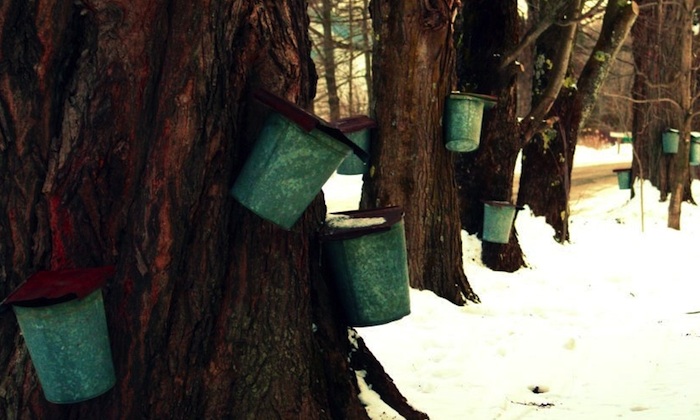 OLD SCHOOL SUGARING:  It used to be that buckets were the popular method to extract sap. These days tubes are connected to sugar maple trees to take sap straight to the boiling equipment.

A new study by Dartmouth College predicts that the region’s sugar maple tapping season is going to shift for the rest of the century due to the effects of climate change.

“With climate change, daily temperatures are on the rise, which affects sap flow and sugar content,” a Dartmouth press release on the study reads. “By 2100, the maple syrup season in eastern North America may be one month earlier than it was during 1950 and 2017.”

The study was published in the September issue of the journal Forest Ecology and Management.

“The study predicts winners and losers in the maple syrup world, as the planet warms up. … New Hampshire and Vermont, though likely to be the least-affected states, will experience decreases in syrup production,” Dartmouth writer Charlotte Albright and senior media relations officer Amy Olson jointly wrote in an article about the findings.

Maple syrup production depends on temperatures that dip below freezing at night and warm to above freezing during the day. The freeze-and-thaw cycle gets the sap flowing so production can begin.

The study’s methodology examines historical climate data to see how minimum and maximum temperatures affect production each season. The calculations looking forwards are based on what’s called the “RCP 8.5 carbon emissions scenario.” RCP 8.5 means average global temperature would rise by 9 degrees Fahrenheit by 2100. This extreme scenario is not undisputed within the scientific community, but it is widely accepted by the most ardent climate activists as well as the International Panel on Climate Change.

In addition to predicting Vermont’s maple season will occur a full month earlier in 2100 than it does today, the study says producers to the south in Virginia and Indiana will hardly have any production, more maple syrup will be produced up north in Québec than today.

“As the climate gets warmer, the sugar maple tapping season will shrink and will get closer to a December date,” said study co-author David Lutz, a research assistant professor of environmental studies. “Maple syrup producers may want to consider adapting their technologies and collection logistics in advance so that they are prepared for how climate change is going to affect production.”

“Obviously everything is affected by climate, maple notwithstanding,” she said. “What we’ve noticed just in current years … is a shift in the time of the season. In Vermont, we have Town Meeting Day which is in March, and now people are taking advantage of the fact that they are typically having like a spring thaw day sometime in January.”

Voyer noted that the seasons aren’t actually shorter, they are just earlier, and production has still increased.

“There’s been a tremendous amount of research done and improvement in efficiencies, collection methods, boiling methods, and the introduction of reverse osmosis machines. All of those efficiencies have actually contributed to the increase of production capabilities,” she said.

Mario Fradette of Fradette’s Maple Syrup in East Hardwick said he’s been keeping weather records for about 18 years and has noticed a difference.

“The season starts earlier than it used to,” he said. “I actually made syrup in January three years ago and at least four times in February, and that’s within the last 10 years. It was never heard of before in this part of the country.”

Fradette said the seasons are finishing about a week earlier, too, but that the change has not hurt production.

“My production has been right on, and we don’t have any new taps,” he said. “What it is is you’ve got to be ready earlier.”

“The Vermont maple industry takes the issue of climate change seriously, and [we] are concerned but recognize that there are some areas of hope,” he wrote. “Many of the producers I speak with do express concern about how much ideal sugaring weather there will be in the future.”

Isselhardt said of particular concern is abnormal weather such as a repeat of the very high temperatures back in March 2012. He added that newer technologies play a role in the shifting production seasons.

“Many producers I hear from are tapping earlier than before and utilizing vacuum technology to harvest sap on days when trees tapped with buckets would not be producing sap,” he said. “Some of the potentially more positive areas to recognize would be the fact that maple is produced from forests and continuous forest cover has many benefits related to water quality, flood mitigation and maintaining a working landscape.”

Image courtesy of town of Highgate