Sanders founded Our Revolution, a 501(c)(4) nonprofit group that can accept unlimited contributions without disclosing the identities of its donors, in 2016, and one campaign finance expert believes the group’s work to help Sanders achieve his presidential aspirations could be violating the law.

“Any entity established by a federal officeholder can only raise and spend money under federal contribution limits for any activities in connection with a federal election,” Paul S. Ryan, a campaign finance expert with the watchdog group Common Cause, told the Associated Press. “Our Revolution was undoubtedly established by Sen. Sanders, is subject to these laws — and is seemingly in violation of them.”

Bernie Sanders founded Our Revolution in 2016, and the group is now leveraging its resources to elect him president.

Campaign finance laws state that groups “directly or indirectly established” by federal officeholders such as Sanders can’t “solicit, receive, direct, transfer, or spend funds” for federal electoral activity that exceeds the limitations of the law, which in Our Revolution’s case would be $5,000 per election.

Our Revolution, however, has sent dozens of emails in recent weeks to its supporters touting the work it’s doing to get Sanders elected. The group’s chairman, Larry Cohen, detailed in an email Monday how he had spent a week in Iowa mobilizing 5,000 volunteers to caucus for Sanders.

“Donate now to help us organize Obama/Trump voters and ensure that we nominate Bernie Sanders instead of a corporate Democrat who could easily lose to Trump in 2020!” Cohen wrote.

Our Revolution national political coordinator Sam Rosenthal wrote in an email in November: “[I]f we do our job, we will have the opportunity to vote for Bernie Sanders to become the next President of the United States … help Our Revolution elect Bernie Sanders and fight big money in politics up and down the ballot!”

Our Revolution’s efforts to support Sanders’s candidacy began long before he officially launched his presidential campaign in February. The dark money group characterized itself last January as a “grassroots army to help Bernie win the nomination if he decides to run” in an email to supporters amid its push to get Sanders to enter the race, according to Vermont news outlet Seven Days.

In February, after Sanders announced his candidacy, Our Revolution solicited contributions from its supporters to help it assist Sanders’s campaign by “deploying training materials to volunteers across the country.” Our Revolution spokeswoman Diane May said the group would do “the organizing work that it takes to elect Bernie president” as the campaign began staffing up, according to Seven Days.

Our Revolution has acknowledged the close bond Sanders shares with the group, starting with its founding following his failed 2016 Democratic primary campaign.

“After the 2016 election, Senator Bernie Sanders founded Our Revolution to build a powerful grassroots movement to challenge corporate control of our government,” Our Revolution Executive Director Joseph Geevarghese wrote in a fundraising message to supporters in December seeking donations to “continue to do the deep organizing necessary to elect President Bernie Sanders.”

Sanders’s wife, Jane Sanders, is also linked to Our Revolution. She was listed as a director of the group when it was initially founded in July 2016, according to incorporation records obtained by the Daily Caller News Foundation. Jane Sanders stepped down from her role as Our Revolution’s chairwoman in August that year amid internal turmoil over the group’s structure as a dark money entity, ABC News reported.

In 2018, Our Revolution sublet some of its Washington, D.C., office space to Sanders’s 2018 Senate campaign, according to financial statements obtained by the DCNF.

Our Revolution did not return an email inquiry seeking additional information on the sublease agreement it had with Sanders’s Senate campaign in 2018.

Sanders has directly interacted with Our Revolution during his 2020 campaign. He joined a conference call in September hosted by the dark money group to celebrate its third anniversary. He thanked the group for “doing some of the most important work that can be done in our country,” the AP reported.

Sanders also lists on his campaign website endorsements he has received from three board members of Our Revolution — Justin Bamberg, Jim Zogby and Larry Cohen —  but doesn’t disclose their affiliation with the dark money group.

Bernie Sanders did not disclose on his endorsements page that Larry Cohen and James Zogby both serve on the board of Our Revolution. (Berniesanders.com / Screenshot)

The Sanders campaign did not immediately return a request for comment asking why it did not disclose Bamberg, Zogby and Cohen’s affiliation with Our Revolution on its endorsement page.

Our Revolution received $9.5 million in contributions since 2016 through 2018, but unlike Super PACs, which Sanders often decries, the group is not required to disclose the identity of its donors. Our Revolution reported in its 2018 tax filing that it received contributions of $218,309 and $195,000, but didn’t list the name of the individual or group behind those donations. 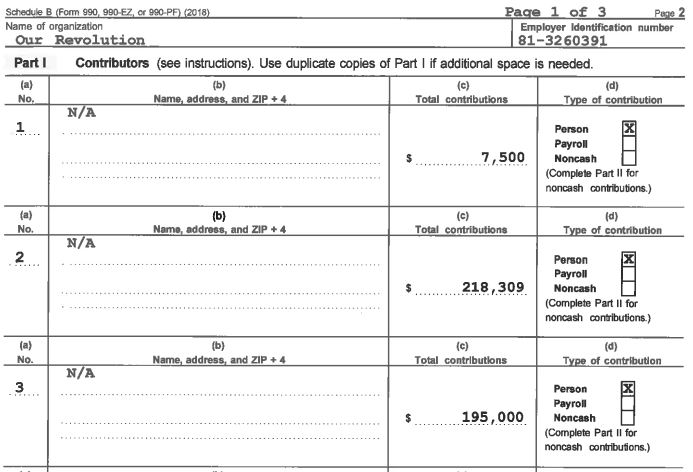 Our Revolution does disclose on its website the names of donors who have given $250 or more in a single year, but it doesn’t disclose the exact amount each individual has given.

Both Sanders and Our Revolution issued statements to the AP denying any wrongdoing.

“Sen. Bernie Sanders and his presidential campaign, in accordance with Senate ethics rules, does not direct or coordinate with Our Revolution,” Sanders campaign spokesman Mike Casca said.

Our Revolution spokesman Paco Fabian differentiated his group’s activities from that of Super PACs, which often dump significant sums of money into television ads.

“We invest our money … in things like organizing and phone banks and canvassing voters on issues that matter,” Fabian told the AP. “We aren’t running ads or doing glossy mailers.”