The political nonprofit group Our Revolution, which Sanders founded in 2016, has been violating the federal “soft money” ban by boosting his presidential campaign since its launch in February 2019, the complaint from the watchdog group Common Cause states.

Campaign finance laws state that groups “directly or indirectly established” by federal officeholders such as Sanders can’t “solicit, receive, direct, transfer, or spend funds” for federal electoral activity that exceeds the limitations of the law, which in Our Revolution’s case would be $5,000 per election. 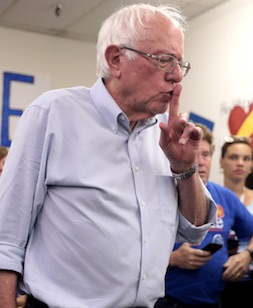 “Because Sanders set up Our Revolution and they have raised and spent money in candidate elections, Our Revolution is required to comply with contribution limits, register with the FEC and discloses its donors — but it hasn’t,” Common Cause attorney Paul S. Ryan told The Associated Press. “It’s his establishment of the group that triggers these laws. That means a $5,000 limit, full donor disclosure and no contributions from prohibited sources.”

“The facts surrounding Our Revolution, including its founding by Sen. Sanders, its receipt of six-figure contributions, its failure to disclose donors to the FEC, and its political spending in Iowa and elsewhere, point to a clear violation of the federal soft money ban,” Ryan added in a separate statement Wednesday.

Our Revolution is a 501(c)(4) nonprofit group that can accept unlimited contributions without disclosing the identities of its donors. The group has received $9.5 million in contributions starting in 2016 through 2018. In 2018, Our Revolution reported that it received contributions of $218,309 and $195,000, but didn’t disclose in its tax filing the individual or group behind those donations.

Our Revolution does disclose on its website the names of donors who have given $250 or more in a single year, but the list is not comprehensive. It doesn’t disclose the exact amount each individual has given, and Our Revolution grants anonymity to donors who wish to keep their identities hidden, according to AP.

Our Revolution has sent dozens of emails in recent weeks touting the work it’s doing to get Sanders elected. The group’s national political coordinator, Sam Rosenthal, wrote to supporters in November 2019 soliciting donations to “help Our Revolution elect Bernie Sanders and fight big money in politics up and down the ballot!”

Sanders previously denied wrongdoing with his dealings with the dark money group. He tried distancing himself from Our Revolution on Sunday during a candidate forum in New Hampshire, but he declined to publicly ask the group to stop assisting his candidacy, saying that if he “told them what to do, that would be a violation of campaign finance law.”

But former FEC lawyer Adav Noti told the AP that there are no provisions in the law that would prohibit Sanders from publicly disavowing support from a dark money group such as Our Revolution.

Our Revolution and the Sanders campaign did not return a request for comment.

Sanders’s wife, Jane Sanders, is also linked to Our Revolution. She served as a director of Our Revolution for a brief period of time following its July 2016 founding, incorporation records show. Jane Sanders stepped down from her post within the group in August that year amid internal turmoil over the group’s structure as a dark money entity, ABC News reported.

Our Revolution also shared a relationship with Sanders’s 2018 Senate campaign as well, having sublet some of its Washington, D.C., office space to his re-elect effort.

Sanders has directly interacted with Our Revolution as recently as September 2019 when he joined a conference call hosted by the dark money group celebrating its third anniversary, thanking it for “doing some of the most important work that can be done in our country,” the AP reported.