The evening opened with reciting the Pledge of Allegiance and signing “God Bless America.” Linda Kirker, a former state legislator, shared her poem “Land of the Free, Home of the Brave!” Kirker also said CRT “pertains to equity, not equality, and creates divisions,” and added that it “segregates students based on skin color.” 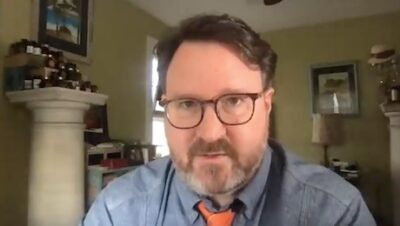 University of Vermont professor Aaron Kindsvatter, one of the event’s speakers, said he’s concerned that UVM is looking to adopt its definition of racism and anti-racism from Boston University professor Ibram X. Kendi. Specifically, a racist would be defined as “one who is supporting a racist policy through their actions or inactions or expressing a racist idea.” The phrase anti-racism would pertain to one who “is supporting an anti-racist policy through their actions or expressing an anti-racist idea.”

“CRT is so very effective and so very pernicious,” Kindsvatter said. “It fundamentally gives those upon whom it is inflicted a choice between temporary status as a good person who is ‘doing the work’ — work which is purposely never clearly defined so as to make it indefinite — and being understood as some un-human composite, such as a fragile white, a self-hating person of color, a white supremacist or a multiracial white. CRT gives a person a choice between being valued as a human or being dismissed as a problem, and that is no choice at all.”

Vermont Grassroots founder Ellie Martin addressed the audience and talked about growing up in Vermont as a young girl, and “not liking communism and not wanting it in Vermont or America.”

“Communism has infiltrated our American society and I’m fighting against it everyday,” she said.

John Klar, an attorney and farmer who runs Vermont Liberty Network, said critical race theory is most easily understood as the direct opposite of the teachings of Martin Luther King, Jr.

“It segregated students, and allocates wealth and opportunities solely based on skin color,” Klar said. “It is [cult-like] in its insistence that one must either bow to its anti-constitutional tenets or else be attacked as a white supremacist.”

“Parents must inspect their children’s school materials. School choice is the future,” he added.

Vermonters for Vermont Initiative founder Gregory Thayer told the audience that CRT is not about race but “about Marxism and tearing down our American history, culture, our statutes and systems, and its about destroying our American Freedom and Liberty.”

Thayer started his organization in 2018 to educate all Vermonters because of what he has witnessed first hand.

“CRT violates our Constitution, the 14th Amendment, the Bill of Rights, the 1964 Civil Right Act. It also violates everything that Dr. Martin Luther King fought for and taught us, as well as Frederick Douglas and Booker T. Washington,” he said.

The night concluded with some audience questions on how to get involved and see what is being taught in schools. Klar told the 75 people in attendance that they have a right to ask for and petition their local school board and teachers for documentation and curriculum being taught to their children.

7 thoughts on “CRT is ‘so very effective and so very pernicious,’ UVM professor says at forum”