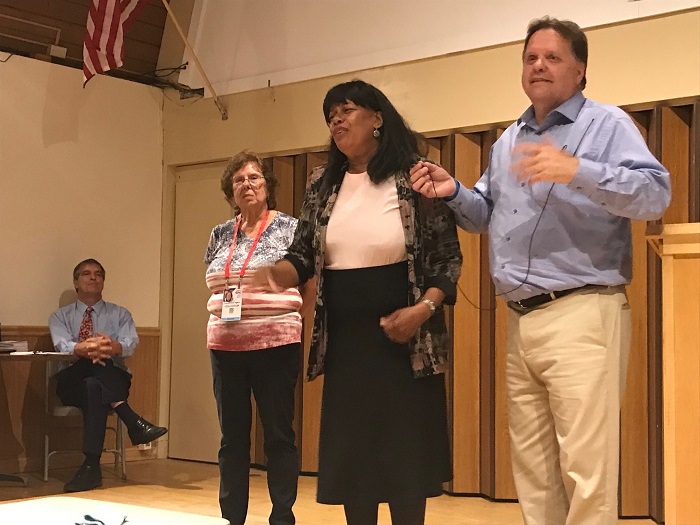 STANDING AGAINST CRT: From left to right are Ellie Martin of Vermont Grassroots, former military officer and educator Alice Flanders, and Gregory Thayer of Vermonters for Vermont.

BARRE, Vt. — Opponents of the social justice-themed curriculum known as critical race theory held a town hall meeting Wednesday night and said the theory teaches children to judge people by their skin color, not by the “content of their character” as preached by Martin Luther King, Jr.

“This critical race theory was a solution waiting for a problem,” Flanders said, noting that drive and hard work allowed her to achieve success in the military space program, and also in managing the Pentagon’s multi-billion-dollar budget.

“There were people who were prejudiced, I’m sure there were,” Flanders said. “But by my sophomore year, because I’m so good, I became the captain of the junior math team at a predominantly white girls school.”

She said she worked to achieve at elite schools, and she mocked statements by Vice President Kamala Harris that “equitable treatment means we all end up at the same place.”

At his turn to speak, Klar shared that a bus his group uses to travel to events was recently vandalized and made to have the letters “KKK” on its side.

“It’s a heinous day in Vermont when I am labeled a KKK member,” he said. “This is what they have to do when they don’t have actual KKK members.”

“All of you who are white, by definition, under critical race theory, are racists — you are subliminally racists, and all black people should hate you because you hate them,” he said.

Hafner shared data from a Wallethub study that indicates blacks in Vermont have higher education degrees.

“Somehow I think we missed the boat,” Hafner said. “Instead of raising a fist we should have figured out ways to celebrate what has transpired from the ’60s to today.”

Hafner praised Essex School Board member Elizabeth Cody for exposing CRT and inviting parents to see what is being taught to kids.

“She recognized what was happening at her school district and decided she was going to take a proactive stance,” Hafner said.

Martin said in addition to CRT, the COVID-19 lockdowns are an example of detrimental education policy.

“Did you ever think the day would come when you as parents would be forced to make your little kid wear a mask all day in school and be sitting 6 feet apart from one another?” she said. “Did you think that would happen in America? … Is that not what they are trying to do in America? To train the kids to obey the government over their parents?”

She added that CRT originates from non-American sources.

“It comes from communist, Marxist tactics, and that’s exactly what they do,” she said, adding a historical quote regarding the indoctrination of youth by Soviet Russian leader Vladimir Lenin: “Give me four years to teach the children and the seed I have sown will never be uprooted.”