President Joe Biden wants educators to teach students that racism is endemic in America. He and his “woke” allies think students should learn that our nation was born of the desire to enslave other humans, not as a struggle for freedom. They also believe that the government should racially discriminate, today and in the future.

The president wants these things so badly he’s asked his secretary of education to prioritize grant funding for K-12 history and civics curricula that preach this revisionist history. 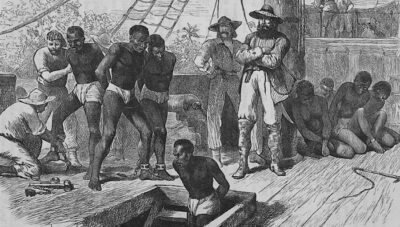 Slaves aboard a slave ship being shackled before being put in the hold. A wooden engraving.

That would be a huge mistake. The vile, ahistorical teachings of critical race theory should be consigned to the ashbin of history, not taught as sacred ideology in our nation’s schools.

Like other forms of Marxism, critical race theory teaches young minds to see the world as divided into two categories: oppressors and their victims. The only difference with traditional Marxism is that the critical race theory categories consist of immutable traits such as race, sex, or national origin, not economic classes like the bourgeoisie and the proletariat.

Critical race theory eschews economic classifications because they are too fluid. People can change their stations in life—and under capitalism, they often do. Critical theorists readily concede this point as being one of the downsides of trying to start a revolution with classes that are not immutable.

Critical race theory wants to solve this problem by adding race to Marxism. Critical race theory teaches young minds to focus on nothing but skin color and power, and how one influences the other in public and private life. It promotes racial stereotypes and assumes that humans act according to their category, not as individuals.

This pernicious ideology is already making its way into classrooms across the country—even without the proposed stimulus of federal grants. One example is the Learning for Justice curriculum, a K-12 civics program created by an organization of the same name that operates under the Southern Poverty Law Center.

The Learning for Justice curriculum teaches that “White supremacy culture … appears in any organization that is not actively and effectively working to dismantle it.” Educators, it insists, must acknowledge how racism “is embedded into the fiber of our nation and our schools.”

The proposed rule from Biden’s Education Department goes much further. For example, it recommends material created by the National Museum of African American History and Culture. The museum’s website hosted a chart claiming that “hard work,” “objective, rational, linear thinking,” and following “rigid time schedules” are racist values, mere appurtenances of white culture rather than human practices that lead to success.

The museum, a Smithsonian institution funded through your tax dollars, didn’t remove this racist chart until officials received blowback for such propaganda.

The rule also approvingly cites The New York Times’s 1619 Project, a mendacious series of essays on race that historians spanning the ideological spectrum have denounced.

The project derives its name from its misleading contention that America’s birthdate is not signified by the signing of the Declaration of Independence in 1776, but by the arrival of the first enslaved Africans in 1619 on the shores of what would later become the United States. The project rejects the document that outlines America’s creed that “all men are created equal.”

The project couldn’t even meet basic standards of accuracy. Spanish conquistadors first brought slaves to what are today South Carolina, Florida, and New Mexico starting nearly a half-century before 1619. Another of the 1619 Project’s errors—one from which The New York Times later backed away—was its claim that the colonists fought the Revolution because they feared that Britain would end the practice of slavery. This is flatly false.

Let’s hope the president and his education secretary weren’t fully steeped in the tenets of critical race theory when they issued their proposal to subsidize this anti-American propaganda. If that’s the case, you can help straighten them out. If you agree that these pernicious ideas should not be taught to our children, you can submit your comments about the administration’s proposed rule (as we have) here.