BURLINGTON, Vt. — New City Council member Ali Dieng ran largely on a campaign pledge that he would strictly adhere to voting with his constituents in Ward 7. That promise didn’t last even past the gavel strike of his first vote.

“If I am elected as your city councilor, what the people say, that’s what I will do,” then-candidate Dieng promised in May, as captured on video by Burlington’s Channel 17. “The people who bring me there, I am going to be their representative.”

But at a raucous City Council meeting Monday night, Dieng, a Progressive/Democrat, cast his vote for the North Avenue Project, a controversial bike lane configuration rejected three times by his New North Avenue residents of Ward 7. The project cuts the four-lane main artery connecting downtown and the New North End down to two lanes, and adds bike lanes on each side.

While the Council’s approval was a foregone conclusion, all eyes were on Dieng to see if he would stand by his promise to vote with the majority of his constituents, even if it meant going against his impassioned liberal supporters.

When the time came to explain his vote, Dieng, to the surprise of many, said his constituents strongly supported the new bike lanes.

“Ward 7 people are for biking, they love it, they like this, and they would like to see this move forward,” he said.

On Town Meeting Day 2016, in the only citywide vote on the project, Ward 7 residents voted against bike lanes by a tally of 1,197 to 765. Two surveys conducted since that time show local residents continue to oppose the lane changes.

“I want to make sure we are being completely factual here,” Wright said. “It may be Councilor Dieng’s opinion that, from the results of the election, Ward 7 is very much in favor of the pilot. But, in actuality, the survey results, which I think have been skewed a little bit one way — even with that, Ward 7 narrowly opposed the project.”

Wright noted a handful of criticisms he had with the survey conducted by Castleton Polling Institute, which was debated for much of the evening. One concern was the postcard’s bland design, which may have led many to overlook it.

“There was fairly strong universal agreement that this postcard was not designed well,” Wright said. “So many people simply said they never got the postcard.”

David Hartnett, I-North District, said he promised his constituents that New North End council members would be permitted to see the survey results before Public Works Department officials would.

“Because we’ve had so much distrust in this process, Public Works could not be the ones to see this data first,” Hartnett said. “There had to be buy-in from this community, and that buy-in would start with the three council members of the New North End. That did not happen — the city received that data (and) never notified any of the three North End members.”

He added that he wasn’t notified about the completed survey data until a public meeting was posted for it on the community website Front Porch Forum. Hartnett said this was evidence that approval of the project was a forgone conclusion and that Public Works was intent on serving a single interest group. 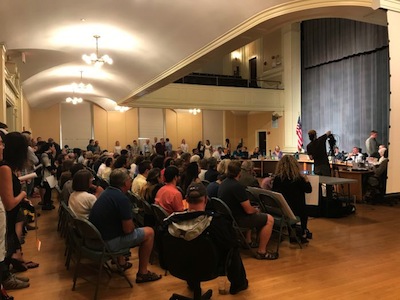 “Local Motion is driving these plans … these plans are made up to advance a world where these people don’t believe in automobiles — and if they do, they think they’re going to be gone in a few years. If you don’t believe me, look at their plans, they reflect that,” Hartnett said.

Portions of the evening focused on traffic safety, which supporters of the project claim is improved by the new road configuration. While Burlington Police Department data indicated that accidents for the pilot project were down about 25 percent, and accidents involving injuries were down around 75 percent, Burlington Police Chief Brandon del Pozo said the sample sizes were “too small to have statistical significance.”

Wright proposed a strike-all amendment that would have allowed for another public vote next year on the project “to instill confidence in this project … and get better data about safety.” He was the only council member to support his amendment with a vote.

Many council members, even those who voted for the project, commented that the process was not transparent.

“The process was an issue for me — not the results, but the process — and the results were driven by it,” said Sharon Bushor, I-Ward 1. “It was flawed and there are lessons that I would like to see taken from this.”

About two-thirds of the public speakers, of which there were around 35, spoke in favor of the project. Most of them appeared to be connected to Local Motion.

Alice Elder, who has lived along North Avenue for more than 25 years, told True North that she supports the project.

New North End resident Deb Wells told True North that the majority of her neighbors have been ignored in the process.

“We voted on this several times now and the answer on this has always been a resounding no,” Wells said. “We do not support the project for a number of reasons. For one, it’s not safe for the bikes to be in the same place where the cars are. A white line doesn’t really do it.”

Dieng, after voting for the bike lanes, also criticized the process directed by the Public Works Department. The head of that department, Chapin Spencer, was the former director of bicycle advocacy group Local Motion.