The notion that public school teachers are at a financial disadvantage relative to their private-sector counterparts has been debunked in a new study by Vermont-based think tank Campaign for Vermont.

On average, public-sector teachers make substantially more in both salary and benefits than their independent school colleagues. 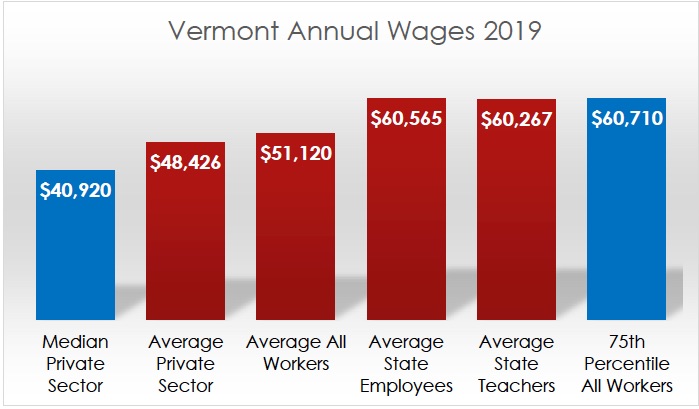 “You see that not only are benefits packages for public employees generally pretty generous, so are our compensation,” Campaign for Vermont Executive Director Ben Kinsley said during an online meeting with media and education policy representatives Wednesday afternoon.

The full 13-page report can be read here

Kinsley shared some data that initially looks positive. Vermont teachers are on average paid competitively with most of the nation. The national average salary for all teachers public and private in the U.S. is $61,730, and Vermont pays its teachers just below that at an average of $61,027. Only 15 states pay their teachers better than in Vermont.

The catch is, Vermont teachers generally have fewer children per classroom.

Also in attendance was David Coates, a member of the Vermont Business Roundtable, who has been an outspoken critic of Vermont’s public pension crisis. He commented on “the myth” that Vermont public school teachers are in poor economic status.

“At the end of the day, everyone in the state of Vermont and particularly those in Montpelier have to understand that it is exactly a myth when the union representatives get up there and they talk about the fact that they are underpaid versus the private sector and that’s the reason that their benefits are so generous,” Coates said. “ … This has been going on for many, many years.”

Other takeaways from the report include wages are on average $12,000 more than the private sector for teachers, and the retirement income is “significantly higher” as well. The authors conclude “extraordinary benefits may not be necessary,” and warn “[this situation is] going to get worse before it gets better.”

Kinsley said taking benefits away from teachers who are nearing retirement would be unwise. Instead, it would be better to focus on lightening the promises towards new incoming teachers.

Asked if another goal might be to raise up the pay in the private sector as well to help bridge the gap, Kinsley said data from 2020 does indicate a sudden rise in pay in the private sector, but that the explanation is unclear. He further noted that due to the shutdown economy of 2020, much of the data concerning economics in education is very skewed. The report therefore does not use 2020 data.

Over the past two years schools have seen a recent trend of students leaving public schools in favor of homeschooling or private schools. Kinsley said any time students leave the public school system, that’s going to affect the cost-per-student, which is already high in Vermont. The cost per student was already reported at over $22,000 per student in Vermont back in 2018, nearly double the national average for that year.

Another unsettling statistic was that if all of the currently eligible-for-retirement teachers in Vermont were to suddenly take that retirement, it would cost Vermont $28 million dollars. Campaign for Vermont’s board president, Pat McDonald, commented on how this would immediately impact the Vermont economy.

Image courtesy of Campaign for Vermont