On the Statehouse steps Friday, conservative-leaning candidates running for office in Vermont called for school safety instead of gun control in the wake of recent mass shootings. 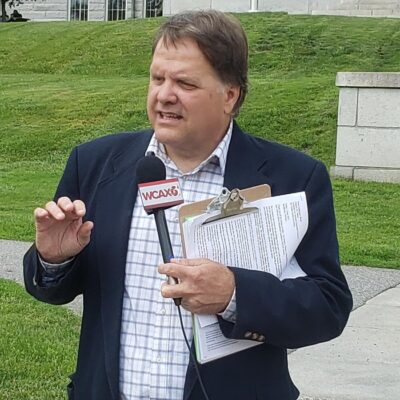 ARMED GUARDS IN SCHOOLS: On Friday at the Vermont Statehouse, Gregory Thayer, a Republican candidate for lieutenant governor, called for placing armed officers at schools to prevent mass shootings.

“We action want action and we’re calling on the governor and the House and the Senate leadership to come back into session to adopt common-sense approaches to school safety, not more senseless gun control legislation that does absolutely nothing to protect our children or our people,” said Gregory Thayer, a resident of Rutland and candidate for lieutenant governor.

The various candidates proposed that lawmakers propose legislation to put armed professionals on school campuses. Thayer said retired law enforcement and veterans would be readily available and equipped for the task.

“The other component is veterans and retired law enforcement officers, let’s get them in the schools to help out with the safety of our children,” he said.

Mark Coester, an independent candidate for State Senate to represent the Windham District, said many other public places in society consider it normal to have high-tech security — but not schools.

“Every airport that we go into we take our shoes off, we take our jackets off,” he said. “… In a courtroom you can be arrested for forgetting and leaving a pair of fingernail clippers in the pocket of your suitcoat. Postoffices have metal detectors.”

Coester added that government spending should be prioritized for protecting school children.

“You’ve got our own State Police that sent 6,000 pounds of ballistic vests to the Ukraine, and what, $650 million dollars that they sent to Ukraine for aid?” he said.

Kathi Tarrant, a Republican candidate from Waterbury running for the Washington-Chittenden House district, suggested that Vermonters are hearing a gun control agenda from multiple sources.

“The media’s sole purpose is to manipulate, with the intent of primarily dismantling the Constitution,” she said. “… Schools today are being used primarily for the propagandizing of youth.”

Anya Tynio, a Republican from West Charleston, is running for Vermont’s U.S. House seat. In a letter read on her behalf by Essex Junction resident Jim Sexton, she expressed support for armed school resource officers, and said she wants to investigate what’s causing youth to turn violent.

“In Washington, D.C., it will be a priority of mine to research and investigate the reason and motivations behind mass shootings,” she stated. “By doing this we can hopefully learn how to stop these tragic events before they begin.”

Sexton, the main organizer behind Friday’s event, reminded all those present that Gov. Phil Scott has responded to school shootings with gun control.

“Governor Scott signed three unconstitutional gun laws on April 11, 2018, on the Statehouse steps because he was afraid of a potential school shooting in Vermont, ironically doing nothing to protect Vermont’s students or schools,” he said.

The bills the governor signed that year included expanding background checks and implementing magazine limits, among other provisions.

Sexton discouraged any new gun control proposals, and instead called for security at school buildings.

“Maybe hiring armed and trained personnel, and placing metal detectors at school entrances and locked secure entrances, would be a good idea,” he said. “Scott should take some of the COVID money and actually do something with it for Vermont students and schools.”