By Doug Badger | The Daily Signal

A proposal to repeal Obamacare entitlements and replace them with grants to states would reduce premiums for individual coverage by as much as 32 percent, according to an analysis by the Center for Health and Economy.

The Health Care Choices Proposal also would modestly reduce the deficit, increase the number of people with private health insurance, and cut Medicaid spending, according to Center for Health and Economy.

The proposal, the product of national and state think tanks, policy analysts, and others in the conservative community, embarks on a new path to empower consumers and return authority to the states to provide people with better and more affordable health coverage options.

The Center for Health and Economy developed the study, at the commissioning of The Heritage Foundation, by applying its independent model to the published Health Care Choices Proposal. 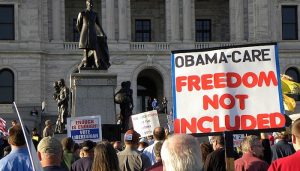 The plan calls for repeal of the Obamacare Medicaid expansion and entitlements to premium subsidies, to be replaced with grants to states to assist the sick and needy.

Unlike previous Obamacare replacement proposals, which the Congressional Budget Office forecasts would increase the number of uninsured by 20 million or more, coverage would dip by less than 1 million under the proposal in 2028, and enrollment would hold steady earlier.

The proposal’s consumer-centered policies also would induce changes in consumer behavior that would reduce health care consumption and lead to greater medical productivity, the study found.

The plan calls for repeal of the Obamacare Medicaid expansion and entitlements to premium subsidies, to be replaced with grants to states to assist the sick and needy.

Unlike current law, where federal spending increases dollar for dollar with premium hikes and Medicaid spending is unlimited, states would receive fixed amounts of federal money, which they would use to develop consumer-centered approaches to make health insurance affordable regardless of income or health status.

The proposal would free states from Obamacare regulations that dictate the kinds of products consumers can buy. States no longer would have to require insurers to charge unfairly high premiums to young adults or group all customers into a single risk pool.

Instead, states would use a portion of their grant to establish high-risk pools, re-insurance, or similar arrangements to protect those with burdensome medical care costs without saddling the healthy with unaffordable premiums. These reforms are the major reasons premiums would drop by 15 percent-32 percent, according to the Center for Health and Economy.

New choices for consumers would increase private coverage and reduce reliance on Medicaid. The proposal would allow people who qualify for subsidies to apply the assistance to the arrangement of their choice, such as short-term limited duration policies and direct primary care. Those changes would reduce Medicaid enrollment and increase the number of people with individual insurance.

The net result, according to the study, would be that 245.6 million nonelderly people would be insured in 2028, compared with 246.4 million under current law, a reduction of fewer than 1 million covered.

Congressional Republicans, who abandoned efforts to repeal and replace Obamacare more than a year ago, are weeks away from a midterm election in which voters have identified health care as their top concern. Democrats have put Republicans on the defensive by accusing them of wanting to scuttle federal pre-existing condition regulations.

Candidates looking for a plan to regain voter trust on health care need look no further than the Health Care Choices Proposal, which will reduce costs, increase choices, empower consumers, and protect the sick without making coverage unaffordable for people who don’t qualify for government subsidies.

Doug Badger is a former White House and Senate policy adviser and is currently a senior fellow at the Galen Institute and a visiting fellow at The Heritage Foundation.