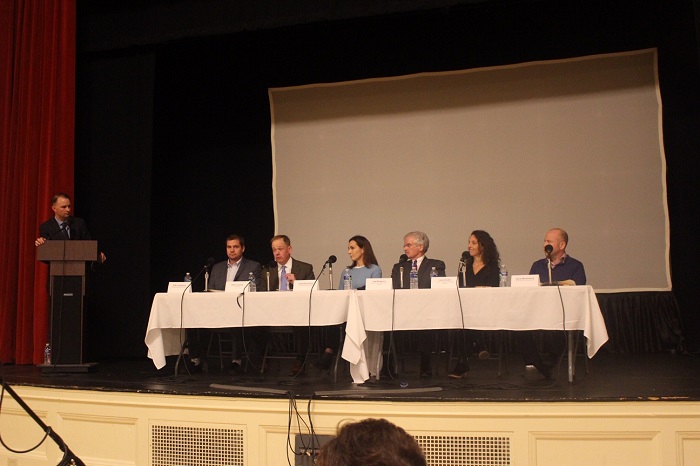 BURLINGTON — As policymakers from Maine, Massachusetts and Vermont gathered Thursday night to discuss plans for a commercial marijuana market in Vermont, critics of legalization showed up to say Vermont farmers can expect to be overrun by large corporate marketers.

The public forum, hosted by Attorney General TJ Donovan in Burlington City Hall’s Contois Auditorium, was billed as a conversation about cannabis, and drew from the experiences of other states.

The panel of marijuana experts and policymakers discussed S.54, currently in House Ways and Means Committee, which would legalize and regulate cannabis sales in Vermont. The bill addresses marijuana licensing rules, testing and safety regulations, tax rates, funds for education and prevention.

The bill has its critics. Bishop Jethro James, pastor of Paradise Baptist Church in Newark, N.J., is an outspoken activists against marijuana legalization. Last year he led a grassroots effort to prevent a “tax and regulate” marijuana market from passing in his home state.

He warned that Vermonters who advocate for commercial pot should be careful what they wish for.

“Vermont, you have the right if you personally want to smoke, but you never can compete with the giants in this world,” he said at a press gathering after the forum. “… The Vermont Way should say, not only do we have [decriminalization], but we have personal use, and so why do we need big marijuana?”

Bishop Jethro James: “Vermont, you have the right if you personally want to smoke, but you never can compete with the giants in this world.”

According to James and other legalization critics, the start-up costs for a marijuana farmer looking to replicate the small-time operations of the craft-brewing industry are far from ideal. Estimates to construct a growing facility are $200 per-square-foot, plus licensing fees for growing, processing and retail.

“You heard a million to five million just to get started,” James said. “It’s not like you’re going to First National Bank and say ‘I’m getting ready to start a business, I’m getting ready to mortgage my farm.’ What really is going to happen [is] one of the big companies will come in and say, ‘You 30-year-old farmer, I could use your acre or two and I’m willing to give you a million dollars for that acre.’ I think he or she is going to take that million and run.”

Judith Margulies, of Timbre Health Consulting, brought up the example of Massachusetts-based Curaleaf, one of the largest marijuana businesses in the world. The company has made headlines for its financial ties to a Russian billionaire and its alleged influence on American politicians.

Margulies challenged the notion that marijuana activism is mostly grassroots. Citing Curaleaf’s own documents, she said Vermont is one of a few dozen states the company considers to have significant policy influence. Maine is also on the company’s list.

She thinks Vermont’s small-farmer marijuana dreams are not realistic, given the competition from the emerging “Big Marijuana” industry players.

“Where are they going here?” she said. “Do they really believe that Vermont’s small farmer is going to be able to play in this?”

Both Margulies and James expressed concern that today’s marijuana is exponentially more potent than the marijuana of just 15 or 20 years ago, and well beyond the potency from the generation before.

James said in his state of New Jersey, pregnant mothers are using pot to treat their morning sickness, but they aren’t concerned or aware of its impacts on the developing fetus. He said their newborns have low average birth-weight because of their drug use. A study by the Colorado School of Public Health supports this suspicion.

Asked if Vermont’s current legalization status without a commercial market is preferable to the old prohibition policy, James said it depends.

“Prohibition has not worked in a lot of places. However, you have to look at each individual state,” he said.

He doesn’t think New Jersey, with its dramatic gaps in wealth between the minority and white neighborhoods, is a good fit for legal marijuana.

But Donovan said commercialization for Vermont is a foregone conclusion.

“We’re past dealing with this. I’m mean, we’ve legalized possession and we have now created a legal-limbo in Vermont where I think kids are more at risk because you don’t have regulation, you don’t have transparency, and you don’t have legitimacy to these markets,” he said.

Laura Subin, an attorney and director of the Vermont Coalition to Regulate Marijuana, suggested during the forum that people of color should be prioritized for Vermont’s developing cannabis industry.

“We have to recognize that our policies [of prohibition] have hurt people who have less, and [we should] bring those people into these emerging businesses by having prioritization for minority-owned businesses and communities,” she said.

“The ACLU said you can’t do that because it’s reverse discrimination,” he said.

James said if social justice activists are sincere, what they can do is ask the governor to pardon non-violent drug offenders who do not have a federal conviction.

Throughout the forum, whenever anti-legalization or anti-commercialization opinions were presented, some marijuana advocates in the audience would laugh and make remarks.

Erik Gunderson, of the Maine Office of Marijuana Policy, advised in his closing statements that if commercialization is to succeed, all voices must be respected.

“You can tell there’s a lot of good people with a lot of concerns at both ends of the spectrum here. [It’s] so important if you do legalize it that you have that in-depth stakeholder-communications and listen to all angles and all views and try to get it right,” he said.