Last week, the Centers for Medicare and Medicaid Services proposed striking an Obama administration-era rule for Medicaid that allows third parties — like unions — to get a percentage of a workers’ checks before they even see it, and in most cases without their knowledge. 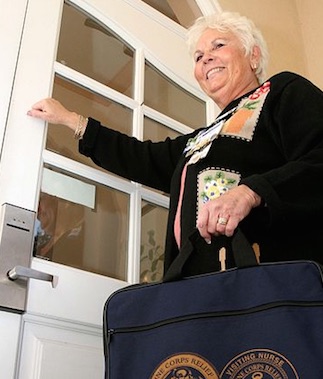 Medicaid funding for In-house personal care providers has been going to unions with little knowledge on the part of care providers.

In particular, the change targets independent home health care providers who are classified as state employees, and therefore eligible to form labor unions, in Vermont and 10 other states.

Centers for Medicare and Medicaid Services announced the proposal just weeks after the U.S. Supreme Court ruled that it was a violation of First Amendment rights for public sector unions to make nonmembers pay agency fees without their consent.

In 2013, Vermont passed Act 48, which allowed independent in-house care providers to be categorized as government workers. According to the State Policy Network, there are 7,500 home health care workers in Vermont who are represented by Vermont Home Care United, a part of the American Federation of State, County and Municipal Employees.

Representatives of AFSCME did not return True North’s request for comment.

Meg Hansen, executive director of Vermonters for Health Care Freedom, said the dues rate for agency fees is around 2 percent in Vermont, so the rule change would be extremely beneficial to home health care providers and the people they are caring for.

“Estimates say that because of the rule change, in total approximation, it will cost unions $71 million,” she said. “So far, estimates of how much they’ve skimmed is nearly $200 million.”

In most cases, home health care workers are family caregivers who are taking care of a loved one, like a spouse or grandparent. Hansen said the siphoning of money is largely hidden from the workers’ view.

“They don’t necessarily know how much is being cut or that it’s even being cut,” she said. “They know they’ll get X amount of money from the government for taking care of their loved ones.”

Presently, home health care workers have the option to join the union or stay separate from it, but they have no choice about the fees that the state automatically deducts from their pay.

“The exact amount of how much they skimmed is not known and will unlikely see the light of day, given that this is an illegal practice. But the 2 percent should provide a fair estimate of what the unions were looking to skim using this scheme in Vermont,” she said.

The Supreme Court ruled in Harris’ favor, overturning the Taft-Hartley Act of 1947 that outlawed “closed shop states” — a place of work where membership in a union is a condition for being hired and for continued employment — to fee non-union members at a certain percentage.

According to a 2014 report on the case, Harris’ argument stated that “the required payment to SEIU amounts to a forced association that violates First Amendment rights.”

“The Supreme Court said they are not state workers and you cannot deduct agency fees or union dues from the Medicaid funds for union membership,” Hansen said.

“This scheme, called dues skimming, has been — and it is a scheme, that’s what the federal authorities have called it — where they just don’t tell you that they’re doing it and they just skim it off,” she said.

A statement released by the SEIU, one of the largest public-sector unions in the country, claims that the proposed rule targets home care workers and is “a transparent attempt to interfere with workers’ freedom to choose to join together in a union and advocate for higher wages, better training, and basic benefits.”

It referred to the proposed rule as “part of the [Trump] administration’s broad, coordinated attack against working people.”

In a statement from the National Association for Home Care and Hospice, William Dombi, the group’s president, said “the CMS proposal is likely to have a negative impact on unions more than any other party.”

“The policy change could make it harder for a union to collect dues. SEIU has unionized a number of the individual providers. … While this should not affect home care companies, it is worthy of some note as an ‘anti-union’ measure.”

Hansen said CMS sided with the Supreme Court ruling and recently stated that the 2014 regulation set in place was not in compliance with Social Security law and would be removed entirely.

She said the money that was being paid to the unions came directly from Medicaid funds, which are set aside to help assist low-income families, elderly and ill people, and individuals who are disabled or handicapped.

“Medicaid money comes from our taxes, it comes for this purpose,” Hansen said. “This is a great social service and we all contribute to it, but that money is then going to unions for whatever they want to do with it. That’s illegal.”

Hansen said this information may not be known to these home care workers.

“It helps the people who are benefiting from this law to not have this information out there,” she said. “We don’t know, so if they don’t know then they won’t make a big deal about it.”

She said Centers for Medicare and Medicaid Services has a 30-day window to gather public feedback before the rule is finalized.

“The CMS wants to crack guidelines to make sure this doesn’t happen again in the future, and they want to make sure that the language is clear,” Hansen said.