On Friday, a hoard of mostly public school students, arms twisted to skip algebra class to go outside on a beautiful day, spilled into the streets in order to block traffic and generally disrupt to the extent possible the daily lives of hardworking citizens. This protest was organized by lobbyists and special interest groups such as Bill McKibben’s 350VT and VPIRG. The idea is to give the impression that a majority of Vermonters demands bold action on climate change now. But it really illustrates the opposite. 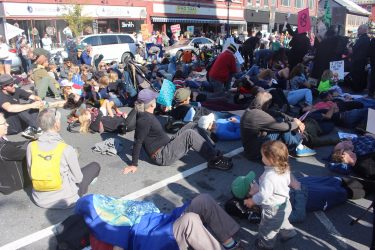 Protesters sit down in the road, shutting down traffic along Main Street in Montpelier.

Yes, a few thousand people took part in the protests (again, mostly school kids given the chance to skip class), but this represents a very small percentage of Vermont’s 620,000 residents.

This strike is a grand temper tantrum raging at the fact that most people do not, in fact, agree with the protesters’ alarmist views on climate. If a majority, or even a respectably large vocal minority, did agree, the highly sympathetic Vermont Legislature, with supermajorities in both the House and Senate, would have passed the package of demanded reforms faster than you can say “Al Gore.” They didn’t. Not because they don’t want to, but because they know that if they did, the overwhelming majority of voters would skin them alive at the polls come November 2020.

The questions for tomorrow and beyond are A) if the sane majority of Vermonters can be intimidated and/or duped by this display of mob outrage, and B) if the sympathetic legislature will attempt to use this as cover for passing an agenda most Vermonters want no part of.

The answers to both questions lie with the silent majority. Personally, I think the strike and following week of action will backfire on the protesters. Making somebody wait in traffic for however long as they are trying to get to work, make it to an appointment at the DMV or the doctor, or go to the post office, is not going to inspire affection. Moreover, Vermonters have historically been proud of “The Vermont Way” of conducting politics, which is civilly and respectfully. There is nothing civil or respectful about “disrupting” daily life.