After a deluge of media reports surfaced linking global warming to Hurricane Harvey, University of Washington atmospheric scientist Cliff Mass analyzed the available data to see just how big a role human emissions of greenhouse gases played in the storm.

“And the results are clear: human-induced global warming played an inconsequential role in this disaster,” Mass wrote in a blog post debunking claims that Harvey was fueled by man-made warming.

Harvey made landfall as a Category 4 hurricane in late August, dumping record levels of rain over the greater Houston area as it stalled over land before moving back out into the Gulf of Mexico.

Thousands of people lost their homes, and more than 40 people died during the storm. Federal and state officials are working to rescue more people and assess the damage, but some climate scientists and activists were quick to link the storm to global warming. 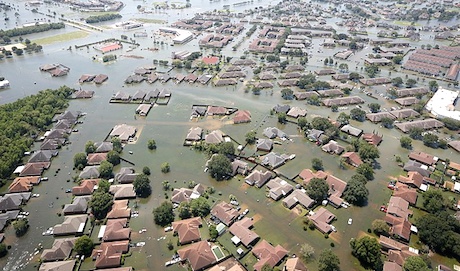 Climate scientist Kevin Trenberth suggested that 30 percent of the rain Harvey dumped over Texas could be attributed to human activities, but Mass found little evidence to support that theory.

“They are using hand-waving arguments to push an agenda, which observations, theory, and modeling show to be incorrect,” Mass wrote. “Global warming is a serious issue and mankind must deal with it, but hype and exaggeration of the current effects is counterproductive in the long term.”

Mass first took aim at claims that warmer than normal Gulf of Mexico temperatures allowed Harvey to dump more rain over Texas and Louisiana, exacerbating flooding. Mass looked at the data and found there’s been “modest” warming in the Gulf, but temperatures in the week leading up to the storm were near normal.

“So Hurricane Harvey developed in an environment in which temperatures were near normal in the atmosphere and slightly above normal in the Gulf,” Mass wrote. “The clear implication: global warming could not have contributed very much to the storm.”

Mass also found that hurricane season precipitation around Houston has shown, if anything, a slightly downward trend over the past 50 years, suggesting that global warming isn’t playing much of a role in the region’s rainfall.

Mass also took on another major talking point activists threw around in Harvey’s wake — namely, that global warming caused the storm to stall over land.

Climate scientist and writer Eric Holthaus wrote in Politico that “[w]eather patterns are also getting ‘stuck’ more often, boosting the chances that a storm like Harvey would stall out.” He cited studies suggesting that melting Arctic sea ice weakened the jet stream.

“Quite honestly, none of this is supported by observations or models,” Mass retorted, showing measurements showing no trend in Gulf zonal winds over the past 50 years.

Mass does note that average hurricane speed did slow a bit in recent years, but not over the entirety of data sets. Also, climate models do suggest slower hurricanes over the Gulf at the end of the 21st Century, but not today.

“The bottom line in this analysis is that both observations of the past decades and models looking forward to the future do not suggest that one can explain the heavy rains of Harvey by global warming, and folks that are suggesting it are poorly informing the public and decision makers,” Mass wrote.